As parents we cannot escape our own histories. Certainly we can make every effort to do things differently with our own families. That is a premise of this book. But in order to make the desired changes, we must first come to terms with how our own histories have affected us for good or ill. Just as the history of...
Continue Reading

Bob’s decision was to dig in and try hard to learn to be a different kind of person so that he could provide different parenting for his children.
Continue Reading 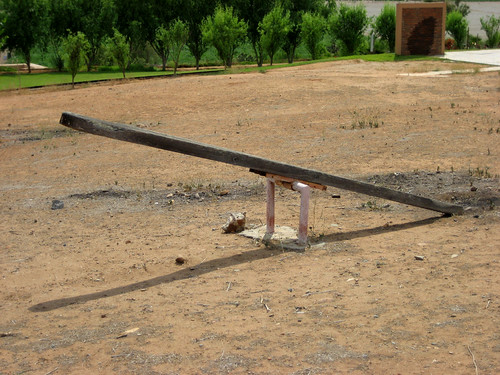 See-Saw Parenting #5: Commitment: the Fulcrum of the See-Saw

In practical terms there are four core components that we believe are essential in making the see-saw model work.
Continue Reading

See Saw Parenting #4: The Way We Were

I would venture to say that the see-saw model of parenting, based on mutual respect, is not the one most of us have known. I would call the more familiar model the Up-Down Model.
Continue Reading

The new approach to parenting that I am advocating can be likened to a see-saw.

Parenting did not come naturally to me. I was totally unprepared to be the mother of four sons.  It felt at times as if I had been transported into an alien culture. I was astonished to learn that boys did not sit for hours playing quietly with their toys. They did not willingly submit to frequent sponge baths and other ritual cleansings. They did not walk chastely through the house, carefully avoiding the lovely bric-a-brac adorning every table.  They ran. They leaped. They thundered. Stairways were put there for them to slide down, using rugs, pieces of cardboard, garbage can lids, or just their butts.  Bathrooms were conveniently supplied with sinks so that they could lock the doors and flood them. Art objects were meant to serve as projectiles, accompanied by an assortment of sounds that apparently only males are genetically equipped to make.

Welcome to See-Saw Parenting: From Cradle to College & Beyond

My blog is not just about “doing parenting”, but rather about being a parent and the life-changing and “soul-full” commitment it requires. It is written for the bewildered parent—one who comes to parenting unprepared for the relentless demands that children make. It is for those individuals who like my husband and me came from difficult childhoods and were yet committed to creating a peaceful family life with happy and productive children.

It recounts the process through which we came to recognize and understand that every human being has a core, a basic essence that he or she will fight to preserve. We discovered that it was our job as parents to know and appreciate that essence in our children so that it could be preserved into adulthood.

Through our personal and professional experience we developed a parenting model which allows us to honor and support that essence as it evolves into adulthood. It is a model which recognizes that all people -- parents and children alike -- need and want mutual recognition and respect. We call our model see-saw parenting because it takes into account the delicate balance required in the relation between parents and children.

Are You Having Sleep Problems During the Pandemic? 5 Likely Reasons

Standing Up For Yourself Is A Skill- Not A Given