# 35 Discovering the Unique Essence of Every Child 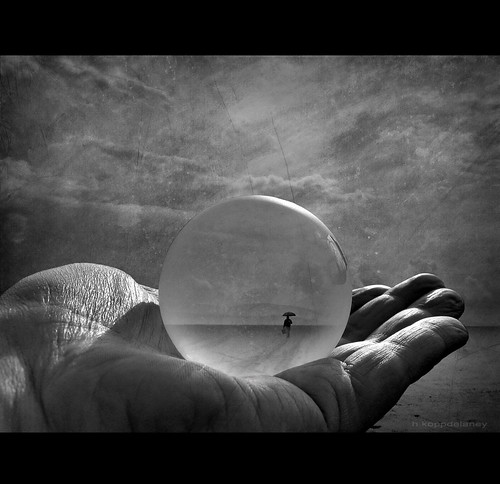 Current musings about downloading or simulating an entire brain into a computer will never come to pass. The essence of our personalities—what makes Nelson Mandela, say, such a special human being—will never transfer to a hard drive.

As little girls, my sister and I invented families that we would one day have. She would become the mother of twins—a boy and a girl—and I would have triplets and name them Cynthia, Christina, and Catherine, some of my favorite names to this day. We talked about our families and tried to imagine what we would all be like as grown-ups. As it turned out, our musings were nothing like reality. My sister and I each had four sons. Never in our wildest imaginings could we have predicted what our boys would be like—their looks, personalities, likes, and dislikes—all of the infinite details that make up a human being. At this writing I have ten beautiful grandchildren, and each of them is utterly distinctive. Certainly I can see the traits of their parents in hair and eye color, expressions and stature—even in personality. But the constellation of characteristics is unique. I am impressed once again at the complexity of individuals.

One of the fundamental tasks that we have as parents is appreciating and connecting with the distinctive nature of each child. Only with a profound understanding of what makes each of us unique can we as parents nurture and protect the child’s “essence” and ensure the “flowering of the spirit.”

Although essence is difficult to define, most of us intuitively understand this core presence in every person, the elusive aura that displays his or her uniqueness. When someone does something unusual or even annoying we say, “Oh, that’s just Charlie.” or “Maura’s always like that.” We understand that there are certain characteristics about people that define who they are. My boys used to say, for example, that Danny, our third son, small in stature, often quiet and meditative—even hermit-like at times—could be indomitable in his convictions. “No one can stop Danny,” they would proclaim, and indeed it was true.

A child enters the world with a distinctive spiritual makeup, distinctive temperament, genetic composition, and biological endowment. The combination of these elements is unique. However, there is something more that captures a baby’s essence. Remember the wonderful childhood story of Puff, The Magic Dragon? Puff came to help the little boy, Jackie Draper, who hadn’t said a single word for several years. The experts had despaired of helping him, but Puff knew what to do. He offered to take Jackie on a journey to his homeland of Hana Lea. But to do so he had to take the “living thing” out of Jackie Draper. The “living thing” became Jackie Paper, and it was he who went on the journey with Puff. As they traveled together, Jackie found his courage and his voice just in time to help his dear friend, Puff. At the end of their journey Jackie returned to his home and re-entered his body. Jackie Draper was finally able to talk again.

The “living thing” inside of Jackie is what I would call his essence. In its most basic sense it is an animating energy. When Puff took the living thing out of Jackie Draper, he became one-dimensional. And so it is with all of us. Our essence invigorates. Without it we die, either spiritually or physically. My mother died in my arms, and when she left this world I felt energy in the form of intense heat leave her body. As we enter the earthly realm in which we live, a certain energy or spirit enters our body. When that energy leaves, our physical body becomes lifeless.

As psychologists, Bob and I observed daily the effects of those whose lives had gone awry because their vital essence had been thwarted. We became aware of how difficult it is to reclaim this essence once it has been crushed. We worked with clients to address this loss and helped them reconnect with and cultivate the essence of their being. It made us very aware of how parenting techniques fostered or diminished this fundamental and defining aspect of self.

In order to preserve a child’s essence we must get to know him or her—deeply, intimately. And then we must use our best intuition and understanding to make the right response at the right moment. That means that our vision of our child must be clear—unclouded by the unresolved perceptions and happenings of our own past. We may call upon our memories and experiences, but we must recognize that they are ours and not our child’s. We must refrain from imposing our past joys and sorrows in undigested form upon him or her.

Children come to us with an innate awareness of this intangible living presence within. They are fresh from the hand of God. Our task as parents is to recognize the precious essence of each child and do all that we can to keep it vibrant. The poet William Wordsworth describes it this way in his “Ode on Intimations of Immortality”:

Our birth is but a sleep and a forgetting;

The Soul that rises with us, our life’s Star,

Hath had elsewhere its setting

And cometh from afar;

Not in entire forgetfulness

And not in utter nakedness,

But trailing clouds of glory do we come

From God, who is our home.

# 35 Discovering the Unique Essence of Every Child

APA Reference
Toronto, E. (2013). # 35 Discovering the Unique Essence of Every Child. Psych Central. Retrieved on July 11, 2020, from https://blogs.psychcentral.com/see-saw-parenting/2013/10/35-discovering-the-unique-essence-of-every-child/
Last updated: 16 Oct 2013
Statement of review: Psych Central does not review the content that appears in our blog network (blogs.psychcentral.com) prior to publication. All opinions expressed herein are exclusively those of the author alone, and do not reflect the views of the editorial staff or management of Psych Central. Published on PsychCentral.com. All rights reserved.