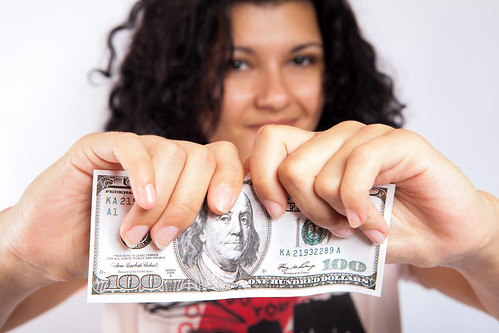 A recent study conducted by two Emory University economics professors provides more evidence, documented by formal research, that money can’t buy happiness, or to be more precise, that spending a lot of money on a lavish wedding doesn’t make a couple’s future prospects for happiness any more likely than spending less. In fact, according the findings of Professors Hugo Mialon and Andrew Francis, a couple that spends over $20,000 on their wedding is significantly less likely to have a happy future together than a couple who spends between $5000-$10,000 on their big day. What they found in their study of over 3000 individuals was that those couples that opted for the higher-cost weddings were 1.6 times more likely to divorce then those who paid under $10,000 for their weddings.

According to Mialon and Francis, theirs is the first academic study to examine the correlation between wedding expenses and the length of marriages. The wedding website TheKnot.com, stated that a recent survey of 13,000 couples in the United States revealed that the average amount spent per wedding in 2013 was $29,858. Nearly15% of couples spent more than $40,000 on their wedding and related events, not including the honeymoon. Other big-ticket items that contribute to the expense include engagement rings (at an average of $5,598), reception bands ($3,469), flowers and other decor ($2,069) and wedding photos ($2,440).

In offering an explanation for so many couples’ willingness to spend so much on weddings, Professor Francis stated, “The wedding industry has long associated lavish weddings with longer-lasting marriages. Industry advertising has fueled norms that create the impression that spending large amounts on the wedding is a signal of commitment or is necessary for a marriage to be successful.” He went on to claim that their findings “provide little evidence to support the validity of the wedding industry’s general message that connects expensive weddings with positive marital outcomes”.

The study did however, find a correlation between the number of people who attended the wedding and the divorce rate which indicated that the greater the number of attendees, the lower the rate of divorce.

Lest readers be too hasty to conclude that the way to divorce-proof your marriage is to spend as little as possible on your wedding and to invite as many people as possible to it, two seemingly contradictory suggestions, let us remind you that there are other ways to minimize the possibility of divorce and maximize the likelihood of a happy marriage. That, however, is a subject too extensive to justice to in one blog or newsletter. Check out our archives to find some useful ideas.

Here’s the abbreviated answer to the question of how that goal can be attained more effectively:

Start with the end that you have in mind and begin by focusing on the kind of marriage that you want your wedding to lead up to.

See if you can identify the kinds of qualities that you will want to strengthen and develop in yourself in order to be able to bring about the outcome that you desire. Give some thought to the kind of behaviors and practices that will support the development of these qualities.

For example, if generosity is something that you think would be something that you think would be nice to have more of in your relationship, you might want to look for opportunities to be more giving in your life. Don’t limit your gifts to material items, but be more willing to give your time, and attention to your partner in an effort to make his or her life easier, more enjoyable, or more fulfilling.If you’d like to have a high level of trust in your relationship, look for opportunities to make yourself more trustworthy by holding a higher standard to respectfulness and integrity.If you really value honesty, make a decision to be truthful and raise your standard of truthfulness in your life to a higher level. If you want to have the most trusting marriage you can have, become the most trustworthy person that you can be.Keep all of your agreements. Don’t make excuses to justify any lapses that occur and accept responsibility for your actions.

If you think that your relationships can’t possibly be any better than it currently is, check in with your partner to see what he or she thinks either or both of you could do that could might further enhance the quality of your partnership.

Many couples make the decision to marry while they are still in the throes of infatuation, which can be a time in which it seems literally inconceivable that either one of us could ever feel anything but love and adoration to the other. In the long run, this turns out to be rarely the case, very rarely.

If you think that the idea of embodying practices that will make you a better, more loving, and trustworthy person, is easier said than done, you’re probably right. But putting your attention on becoming the person of your dreams rather than hoping that a financial investment in your wedding will produce the real payoff that you desire is far more likely to bring about your desired outcome.

The Emory University study didn’t offer any definitive reasons as to exactly why well-attended weddings correlated to fewer divorces, or why more expensive weddings did not correlate with more successful marriages. They simply noted the outcomes without asserting any definitive causality. Feel free to draw your own conclusions. We’re in the relationship-enhancement business, not the wedding business and we don’t see them as being mutually exclusive. But as the saying goes, the most important factor in determining what develops in your life has more to do with what you most value and where you put your attention and energies. Weddings are a one-day event. Marriage is a life-long process. Hopefully.

Linda Bloom LCSW and Charlie Bloom MSW are considered experts in the field of relationships. They have been married since 1972. They have both been trained as seminar leaders, therapists and relationship counselors and have been working with individuals, couples, and groups since 1975. They have been featured presenters at numerous conferences, universities, and institutions of learning throughout the country and overseas as well. They have appeared on over two hundred radio and TV programs. Linda and Charlie are co-authors of the widely acclaimed books: 101 Things I Wish I Knew When I Got Married: Simple Lessons to Make Love Last (over 100,000 copies sold) Secrets of Great Marriages: Real Truth from Real Couples about Lasting Love, and Happily Ever After...and 39 Other Myths about Love: Breaking Through to the Relationship of Your Dreams. The Blooms are excited to announce the release of their fourth book, That Which Doesn't Kill Us: How One Couple Became Stronger at the Broken Places. They live in Santa Cruz, California, near their two children and three grandchildren. To view our upcoming events and to sign up for our free newsletter, visit our website at: www.Bloomwork.com

APA Reference
Bloom, L. (2020). Research Proves That Money Can’t Buy Happiness. Psych Central. Retrieved on May 30, 2020, from https://blogs.psychcentral.com/relationship-skills/2015/02/research-proves-that-money-cant-buy-happiness/
Last updated: 2 Apr 2020
Statement of review: Psych Central does not review the content that appears in our blog network (blogs.psychcentral.com) prior to publication. All opinions expressed herein are exclusively those of the author alone, and do not reflect the views of the editorial staff or management of Psych Central. Published on PsychCentral.com. All rights reserved.