Find help or get online counseling now
advertisement
Home » Blogs » Panic About Anxiety -- A blog about panic attacks, panic disorder, and anxiety. » Tapering Off Of Celexa: My First Two Weeks

Tapering Off Of Celexa: My First Two Weeks 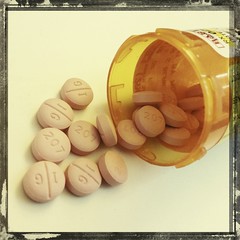 I made my first dosage cut about two weeks ago.

Before we talk numbers, I just want to reiterate something — the word about. Yeah.

See how I’ve used it in the opening sentence?

About two weeks ago.

Why the lack of specificity, Summer? you’re asking.

Well, it’s simple: I plumb forgot to write down the date I began splitting my pills. Oops.

It’s been something of a happy accident, in truth. When I withdrew from Paxil, I documented everything in strict detail. I was on the lookout for brain zaps, nausea, and fatigue.

My nervous system, already hypervigilant by default, kicked into overdrive to help me to track my withdrawal side effects. Was that a twinge of dizziness? Did my stomach just turn? Why did my heart just flutter? I feel warm. Am I warm?

Remember, there’s a difference between “vigilance” and “hypervigilance”, and that difference is usually a panic attack. The former is healthy; the latter is dysfunctional. (Too damn bad the latter comes so naturally to me.)

VIGILANCE: TO ACCEPT OR REJECT?

Don’t get me wrong: There are still benefits aplenty to journaling one’s efforts to withdraw from an SSRI. It’s a great way to track your symptoms and learn to predict how you’ll feel on day 3, day 4, or day 5 after a dosage cut.

It’s sort of like the menstruation tracker of the mental health world (sorry, men; I mean no alienation), only we’re replacing abdominal cramps with brain zaps. (And, unfortunately, we’re keeping most of the other unpleasant period-ic artifacts, but without all the blood. Which is, well, one strangely optimistic way of looking at SSRI withdrawal…right?)

My point is this: I’ve forgotten to keep a detailed journal — in part because life is keeping me busy with life-y things like work and buying a house and stuff — and I’m wondering if I’ve suffered less because of it.

Yes, I can still recount the side effects from memory, but the absence of a physical notebook page waiting to soak up ink might have had a positive effect. It’s sort of made the first dosage cut a bit less salient. Less overt. More back-burner stuff.

I’m not sure, frankly, how I’ll choose to continue: to write and archive, or to try and remember. Memory is fallible, but archiving is, well, heavy. Sometimes.

Before I get into a philosophical inquiry about the nature of human memory, I’ll get down to business. Here’s the summary of my symptoms:

Symptoms: I felt fine the first day, but I definitely had a good round of brain zaps and fatigue for the five or six days that followed. The zaps faded out at the end of the week, but the fatigue stuck around for a bit longer. Also, there were a few headaches and even a migraine.

No nausea, and — well, wait. Maybe a little bit. A little nausea, but so tolerable a sensation I hardly noticed it because I obviously didn’t even remember it until I began typing the last two sentences.

How I handled it: I slept for longer than usual to try and keep the fatigue at bay. I don’t think it worked. I remember drinking more caffeine during these past two weeks than usual.

Also, way more Excedrin. I don’t think it worked, but it felt like a rational choice. I postponed much of my work to the evening hours because I felt dumpiest during the daytime.

Next reduction: Not sure yet. After I close on the house that I’m buying. I don’t want to have a case of the sleepies while I’m trying to sign mortgage paperwork.

I hope you’ll follow along on my journey to zero milligrams — or, well, as close to zero as I can get before that crazy “pregnancy” thing I want to try.

Tapering Off Of Celexa: My First Two Weeks

APA Reference
Beretsky, S. (2013). Tapering Off Of Celexa: My First Two Weeks. Psych Central. Retrieved on February 26, 2020, from https://blogs.psychcentral.com/panic/2013/05/tapering-off-of-celexa-my-first-two-weeks/
Last updated: 21 May 2013
Statement of review: Psych Central does not review the content that appears in our blog network (blogs.psychcentral.com) prior to publication. All opinions expressed herein are exclusively those of the author alone, and do not reflect the views of the editorial staff or management of Psych Central. Published on PsychCentral.com. All rights reserved.

3 Magic Words to Cultivate Your Connection with Anyone (Including Yourself)