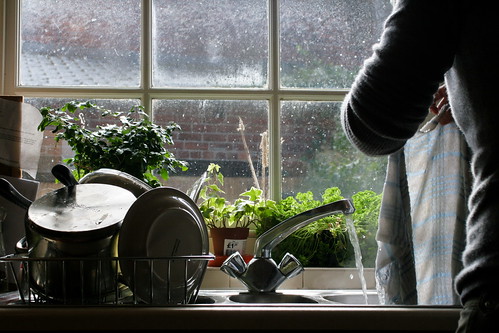 (This is the first post in a new series called “Anxiety Society,” in which I interview everyday anxiety suffers from all walks of life about their struggles, their triumphs, their coping methods, and more. I believe that the more we openly talk about our mental health, the less of a “thing” it becomes. Conversation can reduce stigma, and my interviewees want to be a part of that.)

Meet Devin Wais. She’s a 30-year-old woman who lives in southern Virginia – and she’s a crafter, an avid reader, and loves Netflix for allowing her to have TV show-watching marathons in her living room. Recently, she’s been diagnosed with depression, general anxiety disorder, and obsessive-compulsive personality disorder.

Devin works as a client relations / project manager for a company that helps universities and organizations raise money. I recently chatted with her about her diagnoses and how they affect her relationships, her work, and her social life.

Summer:  So, that’s three different diagnoses. Were you diagnosed with all of them at one time, or was it gradual?

Devin:  I was diagnosed with depression and anxiety at my first meeting with my therapist. The OCPD diagnosis came months later, but I had kind of self-diagnosed myself with that a few years ago.

Summer:  That’s a lot to deal with. How did it feel to receive an official mental health diagnosis? Were you upset? Were you relieved?

Devin:  I was kind of relieved, to be honest. I had been feeling like something was wrong, like I was sadder than most people, since I was 12. I had been on SSRIs for a few years, courtesy of my regular doctor, but had never actually been told, “yes, you are depressed,” or “yes, you suffer from anxiety.” While they were kind of “no crap” statements for me, it was validating to be able to “officially” be diagnosed. Actually, the anxiety diagnosis was interesting. I hadn’t really given much thought to it – I suppose I didn’t realize “normal” people didn’t freak out about things like I did.

Summer:  What sorts of things did (or do) you “freak out” about? How does your anxiety manifest itself? Mentally? Physiologically?

Devin:  My anxiety can be separated into two categories: social anxiety, which I think people are somewhat familiar with – I’m super uncomfortable in crowds and around people I don’t know. I clam up, start to feel claustrophobic, then my heart starts beating super fast, and I just have to get OUT. So that leads into me getting anxious about social situations before they actually happen. I’ll be getting ready for an event and just start thinking about the WHAT IFs and get really upset.

Summer:  What are some of the WHAT IFs that go through your mind?

Summer: What’s the second category, then?

Devin:  The other category stems from my obsessive compulsive personality disorder. I get very, very anxious when things aren’t how they should be. If books aren’t organized properly. If a picture on the wall is crooked. If someone thinks I’m wrong about something that I think I’m clearly right about. If something’s not going the way I think it should go.

Summer:  Does the OCPD affect your relationships at all? Do you have a roommate? I can imagine that day-to-day cleaning and organizing might be a difficult thing to share, then.

Devin:  It does. When I was in college, I lived with two other girls my freshman year and made a chart of cleaning tasks. They didn’t take too well to that. I didn’t really understand why. Now I live with my boyfriend. It’s really, really difficult to live with someone else. Before we moved in together, I had my own apartment and it was the best thing ever. It was always clean. Dishes were always done. If there was a mess, it was MY mess. Now….now I live with a boy. And it doesn’t help that he’s not the cleanest person in the world. So I’ll see the mess in the kitchen and get really upset. And then I get self-righteous about why I shouldn’t have to always clean everything. It’s resulted in a few arguments. I swear that the only reason we’re still together is because we have separate bathrooms.

Summer:  Does the social anxiety keep you from socializing, or do you find ways around it?

Devin:  My social anxiety has gotten worse and it does keep me from socializing. It doesn’t help that my boyfriend is a big homebody. I don’t have many friends in my area so we don’t go out too often, but every single time we do have plans, I get nervous. Thank god for Xanax. I’ve canceled more than a few plans because I feel more comfortable in my bed in my pajamas. There have been many baby and wedding showers that I haven’t attended that I probably should have.

In the second part of this interview, we’ll learn how about how Devin increases her self-confidence, how she copes with the demands of her day job, and what she’s learned from therapy. Stay tuned.

APA Reference
Beretsky, S. (2012). Anxiety Society: Meet Devin (And Her Generalized Anxiety Disorder). Psych Central. Retrieved on August 4, 2020, from https://blogs.psychcentral.com/panic/2012/01/anxiety-society-meet-devin-and-her-generalized-anxiety-disorder/
Last updated: 3 Jan 2012
Statement of review: Psych Central does not review the content that appears in our blog network (blogs.psychcentral.com) prior to publication. All opinions expressed herein are exclusively those of the author alone, and do not reflect the views of the editorial staff or management of Psych Central. Published on PsychCentral.com. All rights reserved.