Find help or get online counseling now
advertisement
Home » Blogs » Panic About Anxiety -- A blog about panic attacks, panic disorder, and anxiety. » Mental Health Day: Are You Aware of Awareness?

Mental Health Day: Are You Aware of Awareness?

I’ll be honest: I sort of hate the word “awareness”.

Thanks to all this memorabilia, we’re so aware of so many diseases and injustices.  (And honestly, I can’t pass that Lupus Awareness billboard on I-476 in eastern PA without thinking that I’ve got lupus.)

We’re practically saturated in awareness of diseases and injustices…but are we doing anything about them?

A satirical book called Stuff White People Like sums up my rationale for disliking the word.  From their blog post on the subject of awareness:

…they firmly believe that all of the world’s problems can be solved through “awareness.” Meaning the process of making other people aware of problems, and then magically someone else like the government will fix it.

This belief allows them to feel that sweet self-satisfaction without actually having to solve anything or face any difficult challenges. Because, the only challenge of raising awareness is people not being aware. In a worst case scenario, if you fail someone doesn’t know about the problem. End of story.

In other words, awareness is cheap.  It’s a simple way to feel like you’re advancing a cause…even when you aren’t.

There’s mental health awareness (which is part of today’s World Mental Health Day).  And there’s autism awareness.  And cancer awareness.  Lupus awareness.  Poverty awareness.  HIV awareness.  Diabetes awareness.  We all buy our little rubber bracelets and we walk in the yearly 5k and forget about the cause for the next 51 weeks.

Awareness might be a good start, but it’s a watered-down form of taking action.

It bears repeating: we need to move beyond mere awareness of mental health issues.

When I was in college, I had a professor named Dr. Wild (his real name!) who had a reputation for being a very critical grader.  But he was critical with good reason: a lot of student writing is nebulous, full of weakly-constructed arguments, and missing examples.  He wanted his students to grow as writers and move away from high school-level essay styles. 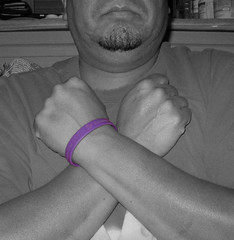 And, at the most basic level, we need to talk to our friends, family, and neighbors about mental health using open and honest language.  We need to be frank.  We need to speak at a normal volume (instead of with hushed whispers) when sharing our stories.  We need to extract the shame from seeking therapy.  We need to shed our embarrassment like a snake slipping out of its skin.

And the only way to de-stigmatize a subject into casual normalcy is by talking about it.

It sounds counter-intuitive, but it’s true: the more that mental health is discussed, the less of a thing it becomes.  And the less of a thing it becomes, the easier it will be to talk about anxiety and panic.  And depression and bipolar.  And schizophrenia and ADHD.  And all the rest.  It’s a positive feedback loop: conversation goes up and stigma goes down.  Stigma goes down and conversation goes up.  Rinse and repeat.

We need to trample down a path so that others may easily follow our lead.  We want our loved ones to grow confident enough to share their mental health concerns with someone or seek professional treatment.  So, let’s lead by example and carve out that path

Today, don’t just visit a website or “like” a World Mental Health Day post on Facebook.  Don’t just read about it on the internet.  You are a human being with the unique capability to connect with other human beings in real life.  Do something positive for someone else’s mental health.  Talk about your own mental health challenges to make it easier to others to take about their challenges.  Ask a friend if their depression is easing up (and support them if it’s not).  Visit that old friend who is having a hard time leaving her house because of agoraphobia.

Mental Health Day: Are You Aware of Awareness?

APA Reference
Beretsky, S. (2011). Mental Health Day: Are You Aware of Awareness?. Psych Central. Retrieved on January 26, 2020, from https://blogs.psychcentral.com/panic/2011/10/mental-health-day-are-you-aware-of-awareness/
Last updated: 10 Oct 2011
Statement of review: Psych Central does not review the content that appears in our blog network (blogs.psychcentral.com) prior to publication. All opinions expressed herein are exclusively those of the author alone, and do not reflect the views of the editorial staff or management of Psych Central. Published on PsychCentral.com. All rights reserved.