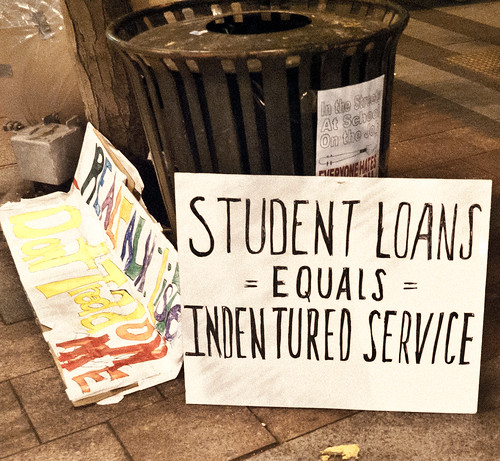 I woke up this morning to the sound of a text message alert. After getting up and checking my phone, I grabbed my iPod Touch at 7:40 a.m. to check my email, Facebook, Twitter, and Reddit. (It’s habit.)

If it weren’t for that text message chime, I probably wouldn’t have gotten up so early. After all, I’m freshly unemployed. There’s no good reason to get up early for work if work no longer exists. No longer is there a gray fabric-covered cubicle with my name on it, with my rolling office chair tucked into its tight confines, waiting for my body (if not my mind) to occupy it at some early hour.

I do not yet know if this is a good thing or a bad thing.

Sometimes, I sit back and compare my day-to-day life with the day-to-day life of my parents when they were my age in the 1970’s.  They didn’t wake up to the sound of text messages.  They didn’t grab a digital device first thing in the morning — well, maybe they smacked the snooze button on their split-flap display clock on the nightstand, but does that really count?  A basic electric clock doesn’t deliver any email messages…let alone provide you with a nearly endless stream of social media updates or compelling news stories.  Social updates were received via land line telephone.  And perhaps from the “Lifestyle” section of the local newspaper.  Uncle Jerry is in the hospital.  Kathy bought a new pair of boots.  So-and-so is engaged.

When their electric clocks buzzed, my parents got up and went to work.  My father worked in a factory, but earned a good wage and made a fair living.  My mother worked as a clerk at a car dealership.

We might say that we’re lucky to have all this newfangled technology. We have cell — er, wireless — phones. We have MP3 players. We have video game consoles that multitask and stream Netflix and play Blu-Ray discs.  We have cable boxes that display on-screen menus.  We have high-definition televisions.  If we define our society by technological advancement, us twentysomethings are winning the game.  Right?  Aren’t we more awash in the luxury of electronics these days than we were in the 1970’s?

This isn’t a blog post about technology, so before it becomes one, I’d better get to my point: we might seem fortunate, us young folks, because we’re swimming in expensive and glamorous digital gadgetry.  But we’re missing something big.  Something my parents’ generation enjoyed as a whole.

Debt-free living and the sense of control it provides.

Higher education used to mean something.  It wasn’t always the one-size-fits-all assembly line that it is now.  It wasn’t always an expectation — it was simply an option.  One option of many.  Neither of my parents opted for a college education, and they were still able to find jobs that paid a fair wage.  (Not to mention that they didn’t need to use that fair wage to pay off student loans.  Instead, they used it toward a down payment on the house they bought together in 1974. You know, back when buying a home was a valuable investment.)

The baby boomer generation missed out on the blessings of modern digital technology, but they had something even more luxurious and valuable — security. Security in their jobs. (My dad worked at the same plant for over 35 years.) And security in their finances. (According to the Social Security Administration, the average yearly wage in 1974 was $8,030.76. Adjusted for inflation, that’s roughly $39,390.41 today.) They had control over their work and financial lives.

I, on the other hand, followed all the modern rules for getting ahead.  I exceeded expectations when I was the first in my family to go to college. I had multiple jobs in college. I completed two internships. Then, I went to grad school for two years and completed a Master’s degree. A Master’s degree! I was so proud. Surely I would zipline into the professional world with that diploma as my ticket.

But, no.  Instead, I fell out of the zipline harness entirely and into a call center. I took a position that only required a high school diploma. And why, you might ask? Well, I had student loans to pay. The recession was beginning to take shape. And, frankly, the other 35 companies I’d applied to didn’t even give me the time of day.

I settled into my gray fabric-covered cubicle for three years. I was employed, yet underemployed. I was anxious to move up. To fully utilize my skills. To maximize my utility as an educated human being. To work autonomously and diligently. To master complex skills and analysis. To find an intrinsic sense of purpose in a day’s work.

And none of that ever happened. I was just a warm body in a call center. I could answer phones, and so I answered them. And my success was measured by how often and how well I answered phone calls.

I DON’T EVEN SEE THE PENDULUM

Before you mistake this for a rant that smells of entitlement, let me bring you back to this morning at 7:40 a.m.: when I picked up my iPod to get my Facebook, Twitter, and Reddit fix, I found a baby boomer who refers to many of his peers as the “Clueless Generation”. Not because they’re dim, but because they’re out of touch with the true reality that us young folks are living in:

“What the Clueless Generation finds difficult to comprehend is that literally millions of highly educated and hardworking young Americans—people who followed all the rules and did everything we told them to do—are either severely underemployed or have no jobs of any kind. Meanwhile, they struggle with the massive educational debts they incurred after the baby boomers decided that access to the bargain-priced higher education from which we benefited wasn’t so important after all.”

This is  a detour from the type of anxieties I usually write about, but it’s an important detour. Sure, I can get anxious about going to the grocery store, socializing, or delivering a public speech, but the state of the economy and our youth’s perennial un- and underemployment looms over my head like a dark cloud.  Do you know any young people who are fighting anxiety or depression that’s been triggered by economic woes? Or from a dead-end job? Or from student loan debt? Or from unemployment? Or underemployment? Or from not having health benefits? Or from endlessly wondering when the pendulum will swing back into our favor?

You probably know many. I sure do.

And until that pendulum kicks back in the right direction, you’ll find me using an iPod app to search for jobs. And I’ll be in good company.

photo credits, in order: Leptonist, my father, my mother.

APA Reference
Beretsky, S. (2011). Meet Today’s Twentysomethings: We’re Anxious, Unemployed and Unsatisfied. Psych Central. Retrieved on January 25, 2020, from https://blogs.psychcentral.com/panic/2011/10/meet-todays-twentysomethings-were-anxious-unemployed-and-unsatisfied/
Last updated: 18 Oct 2011
Statement of review: Psych Central does not review the content that appears in our blog network (blogs.psychcentral.com) prior to publication. All opinions expressed herein are exclusively those of the author alone, and do not reflect the views of the editorial staff or management of Psych Central. Published on PsychCentral.com. All rights reserved.