Find help or get online counseling now
advertisement
Home » Blogs » Panic About Anxiety -- A blog about panic attacks, panic disorder, and anxiety. » Where Does the Word “Anxiety” Come From?

Where Does the Word “Anxiety” Come From? 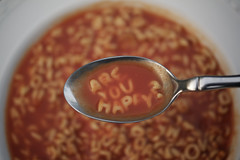 Here on this blog (and on PsychCentral in general), we throw around a lot of the same words.  Words like “anxiety,” “panic,””agoraphobia.”  And words like “spiritual,” “cope,” and “medicine.”

You may know what those words mean, but do you know where they came from?

I participated in the #mhsm chat on Twitter last Wednesday night, and the topic was spirituality and mental health.  Now, let me make this clear: I’m agnostic on the whole God vs. No God debate and I reject religion.  It’s just not for me.  But I’ll play around with the concept of spirituality once in awhile.

And sometimes, when I explain to others that I am agnostic, irreligious, and spiritual, I get some funny looks.  Looks that say, “Hey!  Spiritual doesn’t go along with those other two words!  Violation!”

So during the chat, I started wondering exactly where the word “spirituality” came from and if its etymology would help me to better explain my beliefs.  So, I took it back to its root word: spirit.

And spirit, I’ve discovered, derives from the Latin word for “breath”: spiritus.  Breath!  A vital sign.  One of life’s most important markers of living and of health.  A long-term sine wave of in, out, in, out, in, out.  It’s kind of like the waves of the ocean.  It’s a cycle that reflects many other natural cycles, too: the tides, day and night, the seasons, and plenty more.

Our breath animates us and connects us with nature.  So, to me, that’s what spirituality is: awareness of the breath and the way it acts as a microcosm for the beautiful natural world that we live in.

So, there.  All who would normally call out “violation!”, there’s your answer.  The Latin root breathes life (har har) into the word “spirituality” for me.

WHERE DO THESE WORDS COME FROM?

Let’s look at some other mental health, healing, and coping-related words and their etymologies:

Placebo: The Latin version of this word is basically identical (placēbō).  It means “I shall please,” which is incredibly appropriate: if a placebo pill cures an ailment, well, it has held true to its definition.  You’re cured, and you’re probably pleased at the result.  Related word: placate.

Panic: This one derives from ancient Greek and means “pertaining to Pan”.  According to Wiktionary:

Pan is the god of woods and fields who was the source of mysterious sounds that caused contagious, groundless fear in herds and crowds, or in people in lonely spots.

I don’t know about “contagious,” but I’ll definitely raise my hand on “groundless.”. I panicked today in a department store dressing room and I promise there were no actual threats — bears, tigers, serial killers — nearby. Groundless indeed.

Agoraphobia: This one’s a lumped-together version of two ancient Greek words.  One is agora (a gathering of people, a place of gathering, or the marketplace) and the other is phobos (fear).  Fear of populated places — hmm.  Like supermarkets.  Like shopping malls.  Like crowded streets.  Like public transit during rush hour.  Yeah; this makes almost literal sense. Dead on.

Cope: I like this one.  Multiple sources are listed: it comes from Middle English (“to meet in battle”) and Old French (coper; “a blow [as if from the fist]”). Learning to cope with anxiety is…well, it’s learning how to take a punch in the face from anxiety.  It’s about meeting in battle with your fear.

Medicine. This one ultimately comes from the Latin for “physician.”  A medicus (doctor) would treat you for your ills with medicina (a medicine, remedy or cure).

Still no word on the etymology of brand name drugs, however.  The way that marketing teams create those words is still a mystery to me.  Xanax, Paxil, Zantac, Zyprexa, Prozac…why all the Z’s and X’s?  Were they playing Scrabble at the office?

Triple word score for the win.

Where Does the Word “Anxiety” Come From?

APA Reference
Beretsky, S. (2011). Where Does the Word “Anxiety” Come From?. Psych Central. Retrieved on July 9, 2020, from https://blogs.psychcentral.com/panic/2011/08/where-does-the-word-anxiety-come-from/
Last updated: 22 Aug 2011
Statement of review: Psych Central does not review the content that appears in our blog network (blogs.psychcentral.com) prior to publication. All opinions expressed herein are exclusively those of the author alone, and do not reflect the views of the editorial staff or management of Psych Central. Published on PsychCentral.com. All rights reserved.

Are You Having Sleep Problems During the Pandemic? 5 Likely Reasons

Standing Up For Yourself Is A Skill- Not A Given