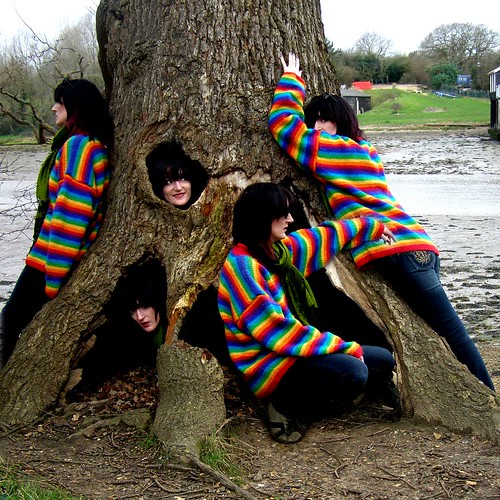 When you’re driving down the road and you suddenly realize you missed your exit or maybe you’re not quite sure where it is because you developed the “white line trance” you’re dissociating.  Those times you get so sucked into a movie or game that someone has to lob a Nerf ball at you to get your attention?  Or maybe when you’re reading a great book and look up to realize it’s dark outside and the last time you checked was noon?  Or maybe you’re an athlete, and you get in the Zone sometimes where everything just flows. Those are all dissociative moments – non-pathological ones. Dissociation is fundamentally akin to trance states, as when people are lifted outside of themselves in spiritual experiences.  In fact, research in the 90s showed that people who were dissociative had more charismatic or spirit-filled experiences.  There are some big implications here in terms of religion, but I’m not going there. Yet.

The difference between these and “having another personality” is degree and distance.  People for whom dissociation is not a major issue usually continue to know who they are, where they are, and their internal arguing is self-contained. Another difference is the structure of experience.  Buddy Braun, a psychiatrist, came up with the BASK model of dissociation, pointing out that a person could “disconnect” from their behavior, affect, sensations, or knowledge (thus “BASK”)—or any combination of these.  I met Buddy at a conference for people working with folks who dissociate and I told him that I thought he’d left out an element: a W that stands for Will.

When you learn to not be present in some way when something happens, it’s usually because you don’t have the choice to distance yourself from the event in some other way.  No child would stay physically present for what they can’t endure, whether the cause is trauma with a little t or a big T.  If the child can’t leave, how special it is to be able to symbolically create someone else—a partial or full personality, another electrical pattern—to handle the intolerable situation! The challenge is that when this process develops in young children, their will (capacity to choose) is undeveloped, and sometimes their environment doesn’t support being present for difficult times (even those like death of a parent, natural disaster or other traumatic events that don’t depend on another person’s volition). The tool works, and as it does it begins to be reinforced, and a reconfigured self begins to develop that aids this child stuck in the time of the intolerable.

In this way, profound dissociation is a developmental disorder, one in which children who are stuck in “flight” but who can’t escape physically learn how to flee emotionally in order to cope.  And the parts that learn to cope develop at different points and in different ways.  So the mosaic has gaps – no one state has all the information or all the “development”.  Each has developmental gaps, learned as forms of state-dependent behavior. A state that might be exceptionally bright may have no physical sensation.  A state that is pure affect may have no awareness of behavior or knowledge.  Another may be unaware that choices can be made.

Language fails here—any self-respecting part of a person that has pride in survival longs for identity, just as any other “person” would.  Yet self, personality, alter, and state all imply ways of being that aren’t quite correct.  Pronouns for dissociative identities are awkward.  Responsibility is a peculiar crisis: who does what in one skin?  And the experience of being the “other” to one’s own “self” is odd in the extreme.  Sometimes awareness that an “other” has been in charge may come from a shifted visual field, unusual strength for tasks, changes in food preferences, even allergies.  Sometimes physical appearance shifts markedly or subtly.  Sometimes preferences of all sorts shift.  And how aware one is of these states and perceptions and ways of being varies – just as it does for anyone who is not so diagnosed – only the degree of change between states may be far more profound.

Think about every day.  You switch between Dotty Daredevil Driver, Suzie Superworker, Mad Mommy, and a host of others.  Hopefully you know this about yourself and you move among roles and expectations with some degree of fluidity, agreement, and awareness.

If you are profoundly dissociative, you may not be aware of these movements.  You may think some of the things that happen to you are the work of others, eliciting accusations of paranoia and fear. (Who changed my furniture? Where did those clothes come from?) Maybe you maintain sense of continuity in self, but change wardrobes radically, making others see you as eccentric (and you might not remember buying or wearing the clothes, let alone see the variations as off-putting!) Or you may “come to” hearing others berate you without any awareness of what happened to create their behavior. These jarring snaps in your reality teach you to dance realllly fast: lots of passing and covering.

An overview of DID by Martin Dorahy found that about 5 percent of psychiatric inpatients and about 1 percent of the overall population meets the diagnostic criteria for DID. Reasonably good research by psychiatrist Colin Ross in the 90s (before he went a little off the rails…), in the heyday of the exoticness of dissociation, indicated that as many as 1 in 1,000 college kids could be diagnosed as dissociative…if their lives weren’t working so well! Frank Putnam, another psychiatrist, documented the statistically significant differences among certain measurable aspects of physiology among people accurately diagnosed with DID and actors: the difference among roles an actor assumed were not as great as those among a person with DID moving among themselves.

But the media frenzy, the ways in which people with multiple personality disorder (as it was called then) were so unbelievable, the over-focus on horrific abuse as the cause of their difficulties, and the exoticness of the process pushed a lot of people who might otherwise have been diagnosed back into the closet. It is a closet where the gifts and the challenges of dissociation are often covered over with “eccentricities” or other diagnoses, many of which are considered more intractable and difficult than dissociation. Bipolar disorder, borderline personality disorder, anything beginning with “schizo” and substance abuse can all accommodate shifts in the self to other configurations.

Functional multiplicity is part of many people’s lives, many of whom have no diagnosis at all. The difference between the “spacing out” a lot of us do, and shifting into another totally separate state, is only one of degree and distance, and how functional our lives are on a general basis.

APA Reference
Power, E. (2014). The Line Between “Spacing Out” and “Dissociation” is Only Degree and Distance. Psych Central. Retrieved on July 12, 2020, from https://blogs.psychcentral.com/organizations/2014/11/the-line-between-spacing-out-and-dissociation-is-only-degree-and-distance/
Last updated: 3 Nov 2014
Statement of review: Psych Central does not review the content that appears in our blog network (blogs.psychcentral.com) prior to publication. All opinions expressed herein are exclusively those of the author alone, and do not reflect the views of the editorial staff or management of Psych Central. Published on PsychCentral.com. All rights reserved.