Find help or get online counseling now
advertisement
Home » Blogs » My Meds, My Self » Enduring Psychic Pain vs. Feeling “High” on Meds? 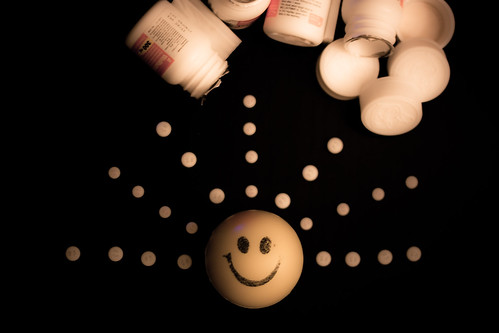 Last week, I featured a guest post from M., a reader from Texas who began taking Ritalin for ADHD when she was 12, then quit before college.

M. concluded in retrospect that taking that taking Ritalin taught her she couldn’t rely on herself to control her behavior. Instead, she learned to look to others for feedback, which she thinks provoked her anxiety.

Today, I’m following up with the second half of M.’s medication story, about her experience starting Zoloft in her mid-20s to treat some of that residual anxiety. Read on to find out how she fared during a second stab at medication treatment.

When I was 26 years old and my husband and I had been trying unsuccessfully for six months to have our first child, I became debilitated by the anxiety.

I was losing control of my emotions left and right, experiencing panic attacks, and it was becoming difficult to function. This is the point when I was prescribed Zoloft.

I was hesitant, as I did not enjoy the insomnia that came with the last maintenance drug. I also didn’t like the idea of needing a pill to function.

[But] I was in such a desperate place emotionally that all of that didn’t really matter. The thought of embarrassing myself or disappointing someone due to my out of control emotions absolutely disgusted me.

Going on the Zoloft did help me. I felt more in control of my emotions and that gave me relief. My anxiety was still very prominent, but I felt less susceptible to emotional outbursts.

My dosage was increased twice over a period of seven years, which was the total amount of time I was on the medication.

Only during the sixth year did I start therapy with a psychologist. The reason for starting therapy was that my marriage was in trouble, not because I wanted to work on my anxiety. By then, I viewed my anxiety as a handicap I could really do nothing about.

It was my burden to bear, my condemnable quality that made who I really was unacceptable.

I really came to value the therapy because it helped me to look at myself and my situation differently. I knew I was trying to understand myself better, and that felt like taking action in a realm where I had been complacent. It started me on a path of self-acceptance. After a certain amount of time in learning how to replace my fearful thoughts with more compassionate thoughts, it became more natural.

But my 100mg of Zoloft made me feel like I was high on MDMA [Ecstasy] all day long. It felt fabulous for a while, but then it started to feel fake.

I considered that maybe, with my reduction in anxiety, my body was now producing the serotonin it needed and the medication was overkill.

I was determined to see what it was like. I was determined to really give trusting myself a try even if I crashed and burned in the end. I was surprised to find that I myself would desperately question that decision over the course of withdrawing.

The physical effects of withdrawing were unpleasant. Over the course of four weeks, when I was down to 25mg every day and then every other day, I often felt dizzy and experienced the pre-effects of passing out. My arms and fingers would randomly, uncomfortably tingle and be shaky. I also had much trouble with insomnia as my body tensely withdrew.

But it turned out that the hardest thing to overcome was my own belief deep down that I could not function without the medication.

I would start to struggle and believe that maybe it wasn’t possible to truly accept myself, emotions and all. After enduring through this, I have come to recognize how the medication was keeping me from accepting that there will always be struggle in life, that it’s part of the human condition. There isn’t a person alive who hasn’t experienced pain, and there’s nothing in this world to guarantee immunity from it.

Also, the medication kept me from being able to see that those challenging parts of myself have something to offer me once I realize the fear they create is an illusion. I know now that I only need the medication if fulfilling the expectations of others is paramount to accepting myself.

M. has now been free of prescription medication for six months. The only “medication” she takes for her anxiety is cannabis, which she uses as needed.

When she was weaning off Zoloft, her doctor warned her that she could experience an irregular heartbeat if she stopped too quickly. This, combined with the withdrawal effects she experienced and her sense of having felt “fake,” scared M. to the point where she says “I don’t see myself ever been able to accept a prescription-dependent life for myself again.”

For the sake of balance, I want to note that many people, myself included, report feeling more like themselves, not less, on Zoloft and other antidepressants.

Some people, like M., do report feeling “high,” but in my research I’ve more commonly heard people complain that antidepressants flatten out their emotions, taking away both the highs and lows. I’ve experienced a little of this flattening myself, but consider it a reasonable price to pay for emotional stability and the ability to function normally.

M. didn’t experience any major alteration in her sense of self taking Ritalin as a teenager. But in retrospect, she sees Ritalin as a barrier to developing a way of modulating her own emotions and behavior – and a cause of her anxiety.

M. maintains that she is better off without any meds, even though she still struggles with anxiety. The medication, she says, was keeping her from seeing “that those challenging parts of myself have something to offer me.”

What do you think? Is there virtue – or anything else to be gained – by enduring psychic pain? If someone can self-medicate successfully without causing other negative effects, is that a viable, acceptable method of “treatment?”

And though negative experiences with meds can certainly sour people on them, is it possible this is a case of “the bad pill kept me from the good pill? as blogger Bill Brenner puts it?

APA Reference
Bell Barnett, K. (2012). Enduring Psychic Pain vs. Feeling “High” on Meds?. Psych Central. Retrieved on July 10, 2020, from https://blogs.psychcentral.com/my-meds/2012/07/enduring-psychic-pain-instead-of-feeling-high-on-meds/
Last updated: 10 Jul 2012
Statement of review: Psych Central does not review the content that appears in our blog network (blogs.psychcentral.com) prior to publication. All opinions expressed herein are exclusively those of the author alone, and do not reflect the views of the editorial staff or management of Psych Central. Published on PsychCentral.com. All rights reserved.