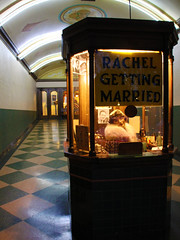 In Rachel Getting Married (2008), Anne Hathaway plays Kym, who is released from rehab in order to go to her sister Rachel’s wedding, which takes place at the home of her father, Paul and step-mother, Carol.

The particular scene I’ve chosen illustrates what happens when a parent doesn’t or won’t acknowledge her feelings and/or proper share of accountability and responsibility, in today’s terms “owning her own stuff.”  The child is then left holding the bag, so to speak, of the parent’s unowned emotions.

Throughout the movie, Kym is portrayed as mostly unstable, reactive, and at times hostile. Her mother, Abby, is shown to be distant and reserved, and not very involved with the wedding plans. The night before the wedding Kym shows up at Abby’s. We’ve learned through the back-story that when Kym was 16, already a drug addict, she was left in charge to baby-sit her infant brother, Ethan. High while driving, she got into a car accident and Ethan was killed.

Kym confronts her mother. It seems to be a conversation they’ve never had up until then:

Kym: Why did you leave me in charge of him? You knew. All of you knew.

Kym: People told you. I was a junkie. I was a crazy drug addict. I stole from you.

Kym: I lied to your face. I weighed six pounds. My hair was falling out. I spent every dinner in the bathroom.

Abby:  Honey, you were sick. That was an illness.

Kym: You know what I was. I stayed in my room for days. I passed out all the time.

Kym:  What were you thinking?

Kym: Why did you leave me?

Abby: I was there. I didn’t leave you.

Kym: Why would you leave me in charge of him?

Abby: Because you were good with him.

Kym: Mom, Mom, why would you leave…

Kym: …a drug addict to watch your son?

Abby: No! You were good with him! You were the best you were with him! Listen to me! Listen! I didn’t expect you to kill him, sweetheart! You were not supposed to kill him!

At this point, Abby physically attacks Kym, pushes her down on the couch, shakes her by the shoulders and then slaps her across the face. Not only can we imagine all the pent-up emotion that Abby has been feeling, but her attack is a metaphor for her own defense system of denial, a way of saying that there is no way she is going there, down into her deep, profound anguish.

If Abby had been able to shoulder her part of the responsibility for the accident, Kym wouldn’t have had to take on the entire emotional burden. But for Abby to do so, she would have had to be able to tolerate her own feelings of guilt, remorse, shame, grief and self-hatred.

Situations such as this are extreme, but the same dynamic happens on a much subtler scale in other ways in our families of origin. The child is stuck with what the parent won’t deal with. A personal example may serve to illustrate.

It was late at night and I was helping my son with his math homework, a word problem. It was complex; there were lots of factors, so the task was to figure out which facts were relevant. I became frustrated “with him” and shamed him for not understanding the problem. Suddenly I realized that it was me who felt ashamed because I was unable to understand it. My defense of superiority had hijacked me into projecting my own shame onto my son. I felt a horrible sense of shameful incompetence, took a time out, had a good cry, and apologized to my son. I told him I was having difficulty with comprehending his homework, and that I could understand how frustrating it must be for him. By my taking ownership of my own bad feelings, he didn’t get stuck with them.

APA Reference
Estes, M. (2011). Emotional Ownership in Parenting in “Rachel Getting Married”. Psych Central. Retrieved on May 29, 2020, from https://blogs.psychcentral.com/movies/2011/10/emotional-ownership-in-parenting-in-rachel-getting-married/
Last updated: 16 Oct 2011
Statement of review: Psych Central does not review the content that appears in our blog network (blogs.psychcentral.com) prior to publication. All opinions expressed herein are exclusively those of the author alone, and do not reflect the views of the editorial staff or management of Psych Central. Published on PsychCentral.com. All rights reserved.