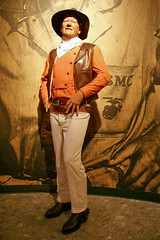 Is this man sexy?

It seems challenging to find a “good” man (especially a father) who is presented as a sexual being in movies. This seems to reflect the “split” in our society; having lots of sex and being sexy is touted as being supremely desirable, especially in advertising, yet we don’t see many male role models in television or film depicting an integrated male sexuality.

What I mean by this is a man considered both “good” and hot.

Stella Bruzzi, in her book, Bringing Up Daddy: Fatherhood and Masculinity in Post-War Hollywood, writes:

“It is not only in the 1950s that the father [in film] is de-sexualized, compelled to renounce or repress his desirability if he is to become a good father. This abdication comes out in a number of ways: the father’s body is rarely on display, and when it is … it commonly becomes a mark of his and his family’s dysfunctionality. He is very rarely the object of sexual desire, although, as in the comedies of the 1990s, he is frequently the chaste romantic hero. The sexual father is commonly either bad or a pervert … and for the majority of Hollywood fathers being a moral, symbolic guide is of greater importance than sex.”

Thinking of some of our favorite film heroes, Gregory Peck as Atticus Finch in To Kill a Mockingbird comes up. His wife is deceased and he exhibits no desire to find another woman. As much as I admire him, I have a difficult time imagining him in bed with anyone!

In the realm of superheroes, most seem “romantically chaste.” There is often the promise of a sexual liaison with a woman that our hero secretly but obviously loves which remains unconsummated, continuously postponed due to yet another villainous fire to put out. Think Tobey Maguire in Spiderman or Robert Downey, Jr. in Iron Man. Although there is desire, the characters never have to confront the act itself. This points to a serious split in love and sex; the message is perhaps that desire is good, but its consummation is bad.

In many of these kinds of films, sex doesn’t even get a chance to rear its “ugly head” because of an impossible love, for example in Twilight, or in the case of Wolverine in X-Men. And Neo, in the Matrix series, seems almost virginal.

Heroes seem more tinged with romanticism and villains with libido. It’s often the bad guy who is connected to his sexuality, as darkly as it may be portrayed. His presence is touched with eroticism in a way that the good guy rarely, if ever, is. Perhaps what can be so appealing about a “bad boy” is that he takes what he wants; he’s connected to his instinctual, more animal nature, something that has been bred out of many of us.

In searching on line, here are some of the votes for sexy villains:

–    Anthony Hopkins as Hannibal Lecter in Silence of the Lambs
–    Gerard Butler as the phantom in the Phantom of the Opera
–    Denzel Washington as Alonzo in Training Day
–    Tom Cruise as Lestat in Interview with the Vampire
–    Christian Bale as Patrick in American Psycho
–    Heath Ledger as the joker in The Dark Knight
–    Michael C. Hall as Dexter in Dexter
–    Vincent Cassel as Thomas Leroy in Black Swan

Even Ralph Fiennes as Voldemort in the Harry Potter series was mentioned.

There are two films that show this kind of splitting well. The first is Pirates of the Caribbean. Johnny Depp as Jack Sparrow is a bad boy (even though we know, or hope, he has a heart of gold). Intimations are made of his sexual conquests, even though we never see them (it is a Disney film, after all). In comparison, Orlando Bloom’s character, Will Turner, although brave, heroic and good seems nearly asexual.

In Fight Club, the split is made obvious as we find out Tyler Durden (Brad Pitt) and “the Narrator” (Edward Norton) are one and the same person. Tyler is ruthlessly instinctive; Norton’s character is “good” in the sense that he is nice, accommodating and compliant, but again seems asexual.

I am wondering how this might both reflect and perpetuate the kind of schizophrenic attitude (both in and outside of the movies) we have about sex [schizophrenic defined in the dictionary as “a state characterized by the coexistence of contradictory or incompatible elements”]. What do you think? Can you think of examples which support the above points? Or that contradict them?

APA Reference
Estes, M. (2011). Male Sexuality in Movies. Psych Central. Retrieved on August 3, 2020, from https://blogs.psychcentral.com/movies/2011/07/male-sexuality-in-movies/
Last updated: 13 Jul 2011
Statement of review: Psych Central does not review the content that appears in our blog network (blogs.psychcentral.com) prior to publication. All opinions expressed herein are exclusively those of the author alone, and do not reflect the views of the editorial staff or management of Psych Central. Published on PsychCentral.com. All rights reserved.

CPTSD, PTSD, OCD and Trauma: How Creating Boundaries Will Set You Free