Attributes of a Good Father in “My First Mister” 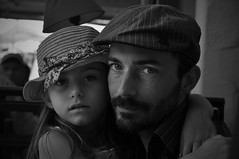 Adolescence is a tricky time for fathers and daughters. The film My First Mister (2001) presents some ideas of how to skillfully traverse this territory.

Jennifer (Leelee Sobieski), who goes by the name of “J,” has just graduated from high school. She self-mutilates, is a “goth,” and is alone, lonely and nihilistic. Her parents are divorced. Her mother (Carol Kane) is Pollyanna-ish; the mother and daughter are polar opposites who can’t relate. Her father (John Goodman) is a pothead with whom she has very little contact.

J goes job-hunting and applies at a conservative men’s clothing store in a large shopping mall. At first she and the owner, middle aged Randall (Albert Brooks), don’t hit it off, but there is something that draws them to one another; he agrees to hire her on a trial basis.

We see J’s transference onto her boss as a father figure. First, she idealizes and develops a crush on him, much as many young girls do with their dads. In the scene in a coffee bar, she imagines Randall in black leather, and tells the waiter he is her lover.

Slowly, their dynamic develops as that of father and daughter in a mutually growth-enhancing relationship. They get to know one another and learn about each other as people, for instance by listening to the music that they each like. They delight in and enjoy one another’s company; we see several scenes in which their playfulness comes out, for example, through a staring contest. They impact one another; they have a “real” relationship.

When trust is broken, they do the work of reparation. For instance, in a fit of jealousy when J sees Randall talking with a woman, she creates an offensive window display of the mannequins having kinky sex. Randall gets very angry with her, but at the same time, stays connected, modeling a way to express anger without shutting down his care and concern for her. He is also giving her a reality check about the impact she has on others. He can also tolerate her anger without pulling away. They are able to “repair” their rift and become even closer.

He teaches her respect, responsibility and accountability. In responding to her sarcastic remarks aimed at him, he tells her, “Rule Number One: “Don’t mock me.” At work, he tells her, “You may think you know how to do this [sell], but for every suit you sell you’re gonna send customers running out of this store screaming. If you wanna sell you have to look the part.” She says, “Dress me.” We can imagine he is providing guidance for her that was not, or could not be, provided at home. And she steps up to the plate accordingly. She behaves and dresses respectfully.

At various points in the film he refers to her in genuinely admiring ways: “There’s my beauty” and “You’re the good stuff.” Upon meeting J’s mother he tells her “Listen, she’s a wonderful girl. Very, very brave. Did you know that? I value her more than I can tell you.” When she is making silly, childish faces, he says, “in spite of what you’re doing, you should know that you’re very beautiful.”

He acts as a good guide and supporter. He offers her an advance so that she can get her own apartment and goes with her to look at and advise her on places. In one case, the landlady does not want to rent to her because of her appearance. Randall claims J as his daughter with pride and says, “This is a highly intelligent girl. She’s an incredible poet. One day she’s gonna be very famous.” He advocates for her and she gets the apartment. His belief in her ends up helping her to believe in herself. He also makes her promise not to hurt herself anymore.

Notice, also, another attribute of a good father: he is not commenting simply on her looks, but on her courage, intelligence, value and potential. Often girls receive comments for how they look (both positively and negatively) rather than for their other attributes.

Although it seems not much is said in popular psychology about the incest taboo or the Oedipal Complex, I believe many difficulties for adults in the sexual or romantic relationship arenas have their roots in this territory. My First Mister touches on this topic in the scene where J gets in bed with Randall while he is sleeping and puts his hand on her breast. He awakens and leaps out of bed, saying that they need to talk about this. He manages to do the seemingly paradoxical: hold a boundary with J without rejecting her, pointing to how a “good” father might navigate such impulses. [For an interesting article on this, see \”Hug Your Daughters\” about fathers who withhold affection once their daughters hit puberty].

J and Randall are connected but separate people whose attachment feels sound (the result of good “fathering”).  It seems she finally feels truly seen by a parental figure, and, even if she is not completely understood by Randall, at least he’s trying. Because Randall provided a healthy father figure with which to work out some of the issues inherent between father and daughter, he’s prepared the terrain for J to have a good relationship with a new man.

In the final scene, J narrates, describing the mark left by a good father:

“Death touched her lips to say good-bye and to always remember the man who touched her first, touched her with his heart. That is forever hers.

My first mister…He awoke in me my heart which beats stronger because of him and all that he has left me.”

Attributes of a Good Father in “My First Mister”
Tweet 0

APA Reference
Estes, M. (2011). Attributes of a Good Father in “My First Mister”. Psych Central. Retrieved on August 13, 2020, from https://blogs.psychcentral.com/movies/2011/07/attributes-of-a-good-father-in-my-first-mister/
Last updated: 7 Jul 2011
Statement of review: Psych Central does not review the content that appears in our blog network (blogs.psychcentral.com) prior to publication. All opinions expressed herein are exclusively those of the author alone, and do not reflect the views of the editorial staff or management of Psych Central. Published on PsychCentral.com. All rights reserved.

How an Invalidating Parenting Style is Affecting You Today

"Is My Parent Disturbed?" How Unhealthy Parents Behave