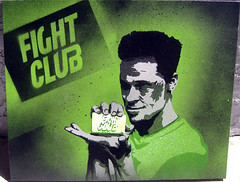 In Part I, we looked at unlived life in “The Man on the Train,” in Part II, at instincts in “Wolf,” in Part III, at the Hero and Villain archetypes in “Collateral.” Now in Part IV, we’ll examine the movie, “Fight Club,” we examine splitting and integration.

Although too violent for some tastes, this film is a great example of how our psyches split into Good and Bad, acceptable and unacceptable. Additionally, it has much to say about contemporary male issues.

The Narrator (he has no name in the film) is played by Edward Norton, is an insomniac with depression symptoms.  His life has no vitality to it. He is submissive with his boss, and is consequently treated with disrespect. He is cut off from his feelings and instincts. In desperation, he attends support groups of all kinds.

Although the film takes a mocking tone, I think this addresses many men’s journeys these days. The Macho image no longer being as acceptable, men have been urged to explore their feminine side. There has been a tendency to polarize, to be either one or the other, and integrating the two has been a challenge.

On a business flight, he meets Tyler Durden (Brad Pitt), his antithesis, who breaks all the rules and is completely anarchistic. Their relationship develops after Tyler challenges the Narrator to a fist fight, who through violence finally discovers the sense of aliveness he’s been seeking. The Fight Club is born and many other men join in.

The Narrator has been seeing Marla (Helena Bonham Carter) platonically, and comes to find out Tyler has been having lots of wild sex with her. We see that the Narrator’s sexual instincts have been repressed into his Shadow, along with his aggression.

Eventually, our hero puts two and two together and realizes he and Tyler are one and the same, metaphorically illustrating how we split off the unclaimed parts of ourselves. Becoming conscious of this reality, having a deeper self-knowledge, is the first step. He has a conversation with Marla, who confirms that he flips from one persona to another and that she’s never known what to expect from him. At the end, he is assertive with her, expresses how he feels about her and that he desires to have a real relationship from this new place inside himself.

The striking thing here is what the Narrator does in order to integrate Tyler back into his psyche; he channels Tyler’s ruthlessness and shoots himself in the neck in order to transform these toxic and self-destructive elements. Paradoxically, however, he has to incorporate and use these very traits to be able to do what’s necessary to achieve integration.

These same themes were covered in “Black Swan” through a female lens, where we clearly saw that integration of all parts was essential to becoming whole, and having all of those parts accessible to us to live our humanity fully.

Part of working with our Shadow is figuring out ways to express the repressed or hidden parts of ourselves without making a mess of our lives. In “Fight Club,” our hero eventually turns his rage into the ability to stand up for himself, and turns his aggression into assertiveness. How can we take the energy of our Shadow elements and use them in the service of integration (without having to shoot ourselves in the neck?)

APA Reference
Estes, M. (2011). Exploring the Shadow: Splitting and Integration in “Fight Club” (Part IV). Psych Central. Retrieved on May 30, 2020, from https://blogs.psychcentral.com/movies/2011/05/exploring-the-shadow-splitting-and-integration-in-fight-club-part-iv/
Last updated: 8 May 2011
Statement of review: Psych Central does not review the content that appears in our blog network (blogs.psychcentral.com) prior to publication. All opinions expressed herein are exclusively those of the author alone, and do not reflect the views of the editorial staff or management of Psych Central. Published on PsychCentral.com. All rights reserved.