Find help or get online counseling now
advertisement
Home » Blogs » Movies and Mental Health » Exploring the Shadow: The Unlived Life in “Man on the Train” (Part I) 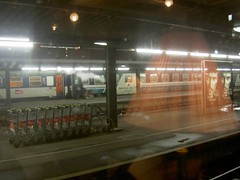 In this series, we will be looking at four diverse films, illustrating various aspects of the Shadow.

The Shadow is whatever is unconscious, repressed, unlived or hidden in our psyches. One of the purposes of depth psychology is to “bring to light” these aspects of ourselves so that we can digest and integrate them, and so become “whole.”

Jung himself said that he’d rather be whole than good.

Poet Robert Bly calls the Shadow “the long bag we drag behind us.” The word “shadow” has the connotation of being something we consider “bad,” like hatred or anger. But, as Shakespeare said, “There is nothing either good or bad but thinking makes it so.”

Emotions like hatred or anger are natural to the human experience; it’s what we do with those feelings that matter. We can access our anger so that we can set a boundary or address an injustice; if we repress our anger, it often comes out sideways, like kicking the cat when we’re feeling frustrated with our spouse instead of dealing with the issue directly.

There is also a range of “good” things that get put into that bag. One could be our creativity, perhaps put away when we were shamed by teachers, coloring outside the lines in kindergarten. Another aspect that can be put in the bag is our aliveness when as children we were told that our liveliness was “too much.” Another possibility is our sexuality, with so much collective shame projected onto it by society. We see its shadow coming out in the U.S., with the largest pornography industry in the world, as well as in reaction formation seen in the secret sexual lives of some evangelical leaders.

Our first film, “Man on the Train” (French, 2002), illustrates the aspect of Shadow centered around the unlived life. Two men meet by happenstance. One is a retired schoolteacher, Mr. Manesquier; the other, Milan, is a criminal. Both are facing potentially fatal deadlines: a serious heart operation and a bank heist. The film reminds us of our mortality—such as becomes especially apparent in mid-life—and puts an impetus on us humans. How much of our unlived lives can we live in the time we have left? How much of all that is inside of us can we actualize?

Manesquier invites Milan to stay with him for a week, as there are no hotel rooms to be had in the tiny village. The teacher, a milquetoast still living under the watchful gaze of his long-deceased mother, has always dreamt of being a cowboy or a bank robber. Milan teaches him how to drink hard liquor and shoot a gun. Manesquier even gets the opportunity to stand up for himself in a café. His quiet and inhibited persona has not allowed all his fieriness and boldness to ever emerge.

On the other hand, Milan has clearly never had a home or stability in his life. Poignant is the scene in which he asks Manesquier to lend him some slippers because he’s never owned any. In another scene, Milan fills in as a tutor for a young student in Manesquier’s absence. We see his longing to be settled, to have history, and to use his intellect – all things which his life circumstances have not allowed him.

In these small ways, both get a chance to live out parts of themselves that had been buried; we can see that none of these qualities are good or bad in and of themselves. Not rocking the boat might be considered “good”; this is how the teacher has lived his whole life and yet it hasn’t served him to live fully. The anti-social (“bad”) aspects of being a criminal actually have a lot of life-force  in them; if used properly, there are some useful life skills to be found there, like boldness and assertiveness. This is a sound example of how the shadow need not be negative or destructive; we can see them as simply parts of ourselves that long to be expressed.

Part of the task of skillfully becoming an adult involves understanding the parts of ourselves that still need a voice. The older we get, the fewer our options. Yet we can still find ways to make room for these aspects. For instance, I may be too old to fulfill my dream of being a ballerina, but perhaps I could mentor a young woman with that same dream, just as Milan could wear slippers for a week in order to symbolically satisfy his psyche.

In watching this film consciously, perhaps we can start to “inquire within” about the parts of ourselves which we have put in the long bag we drag behind us.

[In Part II, we will be looking at the movie, “Wolf” and exploring our instincts and how they get put into the Shadow]

**[All of these four films feature men as exemplars as good as these in films featuring women are rare. For further info on the situation of female roles in films, check out this thought-provoking 2 minute clip: http://www.youtube.com/watch?v=bLF6sAAMb4s]

APA Reference
Estes, M. (2011). Exploring the Shadow: The Unlived Life in “Man on the Train” (Part I). Psych Central. Retrieved on May 31, 2020, from https://blogs.psychcentral.com/movies/2011/04/exploring-the-shadow-man-on-the-train/
Last updated: 8 May 2011
Statement of review: Psych Central does not review the content that appears in our blog network (blogs.psychcentral.com) prior to publication. All opinions expressed herein are exclusively those of the author alone, and do not reflect the views of the editorial staff or management of Psych Central. Published on PsychCentral.com. All rights reserved.