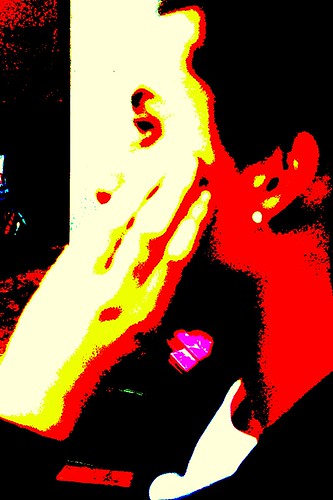 I felt nothing but utter euphoria. I was gunning my little car up the New Jersey turnpike, passing elegant cars and sluggish trucks. I was elated.

I had just ended an argument with a colleague that had been dragging on for months. For a long time I tried to be diplomatic. Then I attempted silent tolerating. Finally I got into a shouting match about the point I was trying to make – the details are unimportant. That’s when I got through. It felt like when I got mad and started yelling I was finally heard.

As soon as I got home, I crashed. I felt so depleted like I had run a marathon.

Strong emotions – and that includes euphoria – can be just as exhausting as physical exertion. When the body pumps adrenaline in high amounts through our veins, it first generates that rush of energy. But after the emotional intensity has subsided, we crash.

It doesn’t matter if we feel fear or anger, ecstasy or excitement – as soon as our system is confronted with strong emotions, the body’s energy resources become depleted.

According to research by psychologists Emma Seppala and Jeanne Tsai of Stanford University, Americans are conditioned to seek happiness by chasing the experience of strong positive emotions. We crave that fist-pumping success or a butterflies-in-your-stomach romantic feeling and equate it with happiness. Many of us don’t even think of simple contentment or plain calm as happiness.

We crave intensity, and some of us go that route even when it comes to negative emotions. Who doesn’t know of a couple that rather fights than tolerates ongoing boredom. Who hasn’t experienced that gut wrenching pain of heartbreak that is devastating and yet the yearning makes us feel so alive.

In our extroverted culture, low intensity personalities are often undervalued. Leaders must be charismatic and outspoken rather than mellow and deliberate. Our idea of fun more often entails high drama sports and amusement park rides than enjoying the sight of a beautiful waterfall or playing a game of cards.

Yet at the same time stress and tiredness are ubiquitous phenomena, and that’s not only due to being overworked, but also to being constantly overstimulated. No wonder our children are suffering from ADD. Slowing down and smelling the roses isn’t on top of our To-Do-lists – not just because we don’t have the time, but because it seems to provide too little in return.

Many Asian cultures have long prized the importance of serenity and calmness. The quieter elements of nature are cherished just as much as the exuberance of human experience. In Japan, the budding cherry blossoms in the spring have been an occasion of wonder and celebration for centuries. In Southeast Asia, the water festival is an integral part of the new year’s festivities. People in countries like Myanmar, Thailand and parts of China splash water on each other to wash away the sorrows of the past and to welcome a new year.

The good news is that Americans are becoming more and more open to Eastern values. We are moving gradually towards a healthier and saner definition of happiness.

Science is the vehicle of communicating that slowing down is good for the heart and that a walk in the woods is just as therapeutic as popping a Xanax. It’s not only Power Yoga and Hot Yoga that’s cool at the gym, but restorative poses and gentle flow are just as beneficial. Meditation has entered the mainstream, and everyone knows that deep breathing exercises are a sure remedy against panic and anxiety.

True happiness arises when we feel replenished rather than exhausted once the thrill of excitement has vanished. “We often are tempted to take striking and energetic actions, but they tend to collapse when we cannot sustain the vigorous effort” advises the I-Ching. “More enduring accomplishments are won through gentle but ceaseless penetration, like that of a soft wind blowing steadily in he same direction.”

Happiness too is won by soft but steady efforts. We cannot force it, but we can continuously move towards a gentler and more loving pace of living life.

mbtphoto (away a lot) via Compfight

APA Reference
Schoen, G. (2016). When Happiness Becomes Exhausting. Psych Central. Retrieved on February 16, 2020, from https://blogs.psychcentral.com/gentle-self/2016/03/when-happiness-becomes-exhausting/
Last updated: 3 Mar 2016
Statement of review: Psych Central does not review the content that appears in our blog network (blogs.psychcentral.com) prior to publication. All opinions expressed herein are exclusively those of the author alone, and do not reflect the views of the editorial staff or management of Psych Central. Published on PsychCentral.com. All rights reserved.