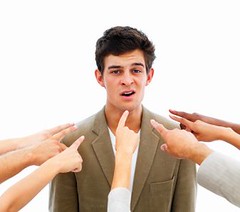 I’ve been listening to a series of talks given by Caroline Myss on Self Esteem. Much of what she says is highly valuable.

But I noticed how she keeps propagating a staunch attitude of absolutely not blaming anybody for their misdeeds. Instead, she insists in a tone that sounds (as she says herself) punitive, that we need to take responsibility for ourselves at all times.

Of course we don’t want to get hung up on pointing the finger at others. Especially in relationships with a partner or a close friend, it’s highly detrimental to insist how only the other is to blame for whatever is going wrong.

There also is a limit as to how long we can blame our caregivers for the sins of the past. All parents make mistakes. It’s a built in feature of being human. And some parents never admit to their terrible misconduct or take responsibility for the damage they’ve done.

We have to deal with the sins of our abusers. We have to confront that we were victims at one point. That we had no power over what was done to us. That we suffered at the hands of the people we were supposed to trust.

We need to acknowledge the powerlessness of these situations and grieve the abuse.

Then, at some point, we need to move on. Whether we can forgive or not is not necessarily the point. Sometimes forgiveness is not possible. But we have to take responsibility for our present life, and work towards having the power to not allow anybody to abuse us ever again.

But simply ignoring the misdeeds of the past, especially when it comes to severe abuse, will keep people stuck in depression and irrational self blame.

I agree with the sociologist Charles Tilly, who says it brilliantly in his book “Credit and Blame”:

“Blame occurs in public debate, in courts, and in everyday life. Although the word ‘justice’ alone often calls up a warm glow, justice commonly consists first of fixing blame, then of imposing penalties for blame. More so than the giving of credit, assigning blame can easily become a persistent, destructive habit. Many a friendship, partnership, and marriage break up over the assignment of blame. But when carried out successfully through retaliation, incapacitation, deterrence, rehabilitation or restoration, blaming brings struggles to an end.”

There is a too much and a too little of everything. If we solely focus on blame, we get stuck. But if we completely repress it, we get equally stuck.

We need to find the right medium how to deal with blame in a healthy way.

APA Reference
Schoen, G. (2012). Assigning Blame Versus Taking Responsibility. Psych Central. Retrieved on February 20, 2020, from https://blogs.psychcentral.com/gentle-self/2012/04/assigning-blame-versus-taking-responsibility/
Last updated: 7 Apr 2012
Statement of review: Psych Central does not review the content that appears in our blog network (blogs.psychcentral.com) prior to publication. All opinions expressed herein are exclusively those of the author alone, and do not reflect the views of the editorial staff or management of Psych Central. Published on PsychCentral.com. All rights reserved.