When You Can’t Stand Someone 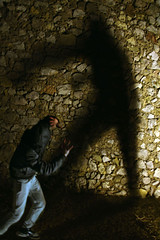 Last week Rebecca honed in on what seemed to quickly become her favorite enemy: one of her husband’s friends brought out the inner bitch in her.

“He is flaky and unreliable and always needs to be the center of the attention” she said angrily. “I can’t stand the guy. I find him appalling.”

I’ve been working with Rebecca in psychotherapy for a while so I had a hunch what this was about. But I was surprised about the intensity of her feelings. I had never seen her so upset about something so seemingly irrelevant. This was just some random guy she barely had to deal with. There was something else going on.

Rebecca grew up with a sibling who was chronically ill. Her parents had no choice but to put a lot of time and attention towards the disease, which left Rebecca feeling that she wasn’t important in the family. Her mother often promised her to take her out to have some fun, but those plans ended up having to be cancelled most of the time.

Having learned through her family environment that she couldn’t depend on other people’s promises, she became somewhat flighty herself. She has a hard time committing to social endeavors for fear of being rejected, and attracts similarly unreliable acquaintances.

Rebecca ended up projecting – what she thinks are – her less likable qualities onto her husband’s friend. Having been treated secondary, she is hurt and put off by unreliable people, but is unaware that she has taken on the same traits in order try and protect herself from further disappointment.

Intense reactions like feeling physically appalled and disgusted by someone points to this dynamic. Even people we were initially quite enchanted by can become the target of our projections once they exhibit their less desirable characteristics.

The more agitated we get, the more likely it is really about ourselves. The old adage “If you spot it, you got it” has value when it applies to very intense reactions.

Of course we also react to faulty behavior when there is a palpable reason to disapprove without necessarily having the same kind of issues. Sometimes others behave simply in a hurtful manner and it doesn’t always mean that we do the same thing. The decisive criteria is the intensity and irrational exaggeration we feel when we deal with a projection.

Sometimes we even become the target of someone else’s projections. In this case the reverse dynamic is at play. Projections are a powerful psychological phenomenon. We need to become aware of when we are the target, as well as when we do it to others.

When You Can’t Stand Someone

APA Reference
Schoen, G. (2012). When You Can’t Stand Someone. Psych Central. Retrieved on June 6, 2020, from https://blogs.psychcentral.com/gentle-self/2012/03/when-you-cant-stand-someone/
Last updated: 2 Aug 2012
Statement of review: Psych Central does not review the content that appears in our blog network (blogs.psychcentral.com) prior to publication. All opinions expressed herein are exclusively those of the author alone, and do not reflect the views of the editorial staff or management of Psych Central. Published on PsychCentral.com. All rights reserved.