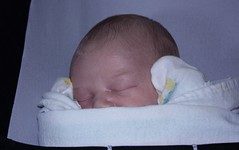 I always thought I would breastfeed my children, even long before they were born.  It turns out I had a few unexpected challenges, but nothing that stopped me from doing the best I could.

I thought I had seen trends of improved acceptance for what I was doing.  My coworkers seemed OK with it.  I saw some articles in the newspaper about moms being proud about their breastfeeding.  So many friends of mine and moms in my family were breast feeders as well.

Because of this experience, I’m somewhat perplexed as to how this could have happened.  Perhaps the people I know are biased in the other direction, shielding me from the other end of the spectrum.  Maybe things have swung back since my breastfeeding days and I wasn’t aware of the change.  Maybe I’m the one who’s out of touch and overestimating its acceptance in our society.  I’m not sure, but I’m really disappointed to hear what a recent report had to say.

A new Science Daily article describes a three related studies that examining how people view the potential work competence of breastfeeding mothers (link).  I find this surprising because mothers who breastfeed usually do so because they know how good it is for them and their baby.  Let me be clear that I’m not saying anything bad about mothers who bottle feed.  I did that too, for longer than I was able to breastfeed.  Bottle feeding is no more an indicator of personal competence than breastfeeding is.

So I’m left to wonder what this is about.  I’d be interested to know how many men and women were surveyed, what their ages were, and what their own exposure to breastfeeding is.  Perhaps it is seen as a distraction or some sort of competition for the workplace.  Maybe it’s seen as a choice a mother would make if they needed to pinch pennies.

Maybe the benefits of breastfeeding (and all the kinds of women who do it) are still misunderstood by the general public.  There’s probably some sort of social taboo with facing the biological usefulness of a woman’s breasts (although there is some acceptability in exploiting their sexual nature).

Support For Breastfeeding Is Still Out There

As a woman who went through years of emotional ups and downs during early motherhood, it’s a shame that mothers have one more social stigma to consider.  Despite my depression, I had great support for my breastfeeding.  In that one act, I knew my babies were getting the best I could give (even when my depression turned against me).

For all of you who may consider breastfeeding or know a mom who might do it, please know there are still so many people who support it.  Be encouraging to a mom who is doing it, or ask questions if you plan on doing it yourself.  Breastfeeding is a very good thing, but it doesn’t make mothers more or less competent at anything (despite what other people might think). Be confident about the choice to breastfeed and pass that confidence to others who could use it.

Readers, what do you think about the stigma with breastfeeding?  Do you see it or feel it in your community?

APA Reference
Krull, E. (2011). Breastfeeding Stigma Still Lingers. Psych Central. Retrieved on August 4, 2020, from https://blogs.psychcentral.com/family/2011/04/breastfeeding-stigma-still-lingers/
Last updated: 19 Apr 2011
Statement of review: Psych Central does not review the content that appears in our blog network (blogs.psychcentral.com) prior to publication. All opinions expressed herein are exclusively those of the author alone, and do not reflect the views of the editorial staff or management of Psych Central. Published on PsychCentral.com. All rights reserved.