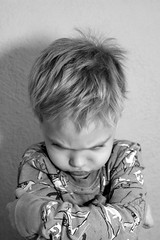 Ever have a time when your kid went on a real streak of misbehavior and you seemed powerless to stop it?  You were frustrated, at the end of your rope, and feeling sort of desperate that the usual things weren’t working, right?

Yep, I think we’ve all had some times like those.  It’s enough to make you pull your hair out and ground them for the next year (if that would even make a dent).  Before you blow your top, sit back a moment and find out what could be behind the scenes.

For example, let’s say your kid is refusing to do things that are part of your basic daily expectations like personal hygiene, sitting at the dinner table with everyone, getting up on time, etc.  There are so many factors that could be involved with something like this.

Your first instinct might be that you are upset because they aren’t following directions.  That’s reasonable to feel, but you’d need to consider how or even whether to express them.

Take several things into account before you act – their age, their developmental stage, the general state of the family, any major transitions they’ve been through, major losses, possible health problems, and so on.  Sometimes kids just test parents for a short while, then they come around.  Other times, kids may be really struggling with something.  Either way, their behavior is saying something.

What Is Your Kid’s Behavior Saying?

Do you see how the scenario could go in many different directions based on the big picture?  Does the refusing behavior make more sense given some different possibilities?  Is your emotional reaction different after reading the kid’s possible thoughts?

So instead of flying off the handle about your kid being disrespectful, consider what might be behind the behavior.  I’m not saying that you shouldn’t give a consequence if they go against your expectations.  I am saying that you may not want to ground them for not taking a shower if the real problem is depression over a divorce.  Get to the bottom of their behavior and you can find an appropriate solution.

Not everything can be fixed – death, separated family, health issues, etc.  But you can at least face it together.  More than anything, kids want to be understood and know that they matter.  Be genuine in your pursuit of the problem and you’ll be doing your best for your kid.

APA Reference
Krull, E. (2010). Kids Communicate Through Behavior. Psych Central. Retrieved on February 18, 2020, from https://blogs.psychcentral.com/family/2010/11/kids-communicate-through-behavior-2/
Last updated: 11 Nov 2010
Statement of review: Psych Central does not review the content that appears in our blog network (blogs.psychcentral.com) prior to publication. All opinions expressed herein are exclusively those of the author alone, and do not reflect the views of the editorial staff or management of Psych Central. Published on PsychCentral.com. All rights reserved.