Parents Try Humor To Stop Whining In Its Tracks 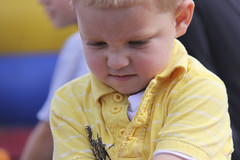 You know what it is when you hear it – whining.  It’s that high-pitched musical way that your child talks to you about something they don’t like.  It’s also usually accompanied by plenty of slouching, maybe a lowered head, a big frown, or look of serious distress.  Plenty o’ drama for such a little person.  Don’t worry – I have an unexpected secret weapon for you.  Humor.

Of course, for you to use humor when your child whines, you have to be able to turn off your usual reaction (whatever that is).  When you hear that lovely tone of voice, your first job is to bite your tongue.  Let them state their case for such weeping and gnashing of teeth.  In fact, look as sympathetic as you possibly muster.  The dramatic effect of the whining actually diminishes when you offer little resistance.  And here’s where you draw them in to your lair of unexpected humor.

Unexpected Humor To Deal With Whining

When my youngest was having a particularly bad whine about something trivial, she also began crying.  In my most serious voice, I said, “Well, you know what you should do?”  At this point, she had fallen for it, hook, line, and sinker.  “You should probably cry about it.”  I looked dead serious, and it made her laugh.

She thought I was going to talk about how horrible her situation was.  I caught her off-guard for just a moment – she laughed and the tension broke.  It certainly helped that her older sisters were in a fine mood and they immediately saw the humor in what I did.  They started giggling, and then she really had no way to contain herself.  It all seemed too silly to really try getting upset about again.

I just did something similar with my oldest when she began to whine about something being “unfair.”  This time, all I had to say was, “Well, you know what you should do about it?” in that same sympathetic steady voice.  She cracked a knowing smile, but then choose to continue her pity party for a little longer.  As I calmly mentioned that she looked like she was ready to keep whining, she knew I was calling her out.  Eventually, she could see I wasn’t going to sympathize with her cause and she dropped the topic without incident.

Sometimes I still bite on the whining and attempt to quell it with brute authority.  It can work, but it doesn’t seem to turn my girls’ mood the same way as the humor.

Readers, try the unexpected today with your kids whining.  Trust me, you’ll probably get an opportunity to use it sooner than you want.

Parents Try Humor To Stop Whining In Its Tracks

APA Reference
Krull, E. (2010). Parents Try Humor To Stop Whining In Its Tracks. Psych Central. Retrieved on February 20, 2020, from https://blogs.psychcentral.com/family/2010/10/parents-try-humor-to-stop-whining-in-its-tracks/
Last updated: 12 Oct 2010
Statement of review: Psych Central does not review the content that appears in our blog network (blogs.psychcentral.com) prior to publication. All opinions expressed herein are exclusively those of the author alone, and do not reflect the views of the editorial staff or management of Psych Central. Published on PsychCentral.com. All rights reserved.