Family Mental Health Around The Web #8 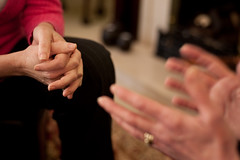 Last week’s Around The Web (focused on bullying) got me thinking more about the issue of suicide.  This weeks resources will be about suicide, a tragic and final act for some people in tremendous pain.  Hopefully, you and your loved ones won’t ever face the reality of suicide.  But if you do, you’ll have some place to turn for answers and support.

Suicide.org is a nonprofit organization with lots of support for anyone dealing with suicide concerns.  It lists several different phone numbers for the hearing impaired, military veterans, Spanish speakers, and LGBT youth.  Certainly a good resource to bookmark, especially if you may have a friend or member of the family in one of those specialized groups that you have concerns about.

Suicide Hotlines.com is organized a little differently.  It includes a listing of crisis hotlines for each state along with a couple of national hotlines.  It even tells you what to do if your local hotlines aren’t working.  Local hotlines are great because the people on the phone are familiar with places near you that can help –  Hospital ER’s, psychiatric hospitals, outpatient counseling centers, and more.

Aside from the phone numbers, Suicide Hotlines also has some good articles about coping with depression and suicidal thoughts.  When you aren’t sure if you need to call, you can find some other things that might be helpful.

Please let me know if you have any other resources on suicide that you have seen or used before.  I sure hope you don’t ever have to use one, but it’s always good know what they are in a worst case scenario.  Thanks so much for your contributions in other Around The Web posts!

Family Mental Health Around The Web #8

APA Reference
Krull, E. (2010). Family Mental Health Around The Web #8. Psych Central. Retrieved on July 13, 2020, from https://blogs.psychcentral.com/family/2010/04/family-mental-health-around-the-web-8/
Last updated: 16 Apr 2010
Statement of review: Psych Central does not review the content that appears in our blog network (blogs.psychcentral.com) prior to publication. All opinions expressed herein are exclusively those of the author alone, and do not reflect the views of the editorial staff or management of Psych Central. Published on PsychCentral.com. All rights reserved.