Communicate Uniquely With Your Kids 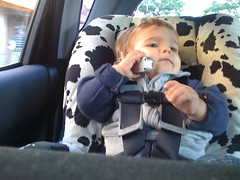 Sometimes as a parent, I realize I need to sit back and just notice things for a minute.  Although that realization tends to be more random than I’d like, I usually get something interesting from it.  Lately, it’s been my communication with my kids.  These patterns and differences occurred to me recently when I was putting them all to bed.  I suppose this is because I get a small cross section of my different communication styles in a relatively short period of time – about a half hour total.

Anyway, these are the things I noticed. Not really earth-shattering stuff, but interesting what I take for granted and don’t think about consciously.  As you read, take a moment to reflect on how you communicate with each of your kids.  See if you notice similarities or differences.

I don’t and haven’t ever used made-up “baby talk” words with my kids. I’ve always spoken to them in full sentences with real words because that’s what I wanted to model. I have noticed that my tone and pitch of my voice seems to go up from oldest to youngest. I speak in my most natural adult voice with my oldest because she can pick up on my verbal nuances and vocabulary the best.

I do just about the same with my middle one, though I think I’m a little more in the middle to make sure she understands me. It’s not like my five year old is a baby any more, but I wonder that I still use a higher pitch voice to keep her tuned in to me. Would that be because her voice is still the highest pitch of my kids, too? Hmmm….makes me wonder.

Obviously my five year old isn’t going to understand the same vocabulary and language use that my ten year old would.  My oldest would understand innuendos, subtle forms of humor, and so on.  Even my middle child would get that to some degree, but even she needs a little adjustment on my part.

I do not notice nearly as much difference between my eight and ten year-olds as I do with my eight and five (almost six) year olds.  I wonder if this has a lot to do with the progress of reading my eight year old has as compared to my youngest, who is just starting to read and hasn’t absorbed nearly the same depth of vocabulary and comprehension.

I speak a little more directly and deliberately to my oldest and youngest because they exude stronger more direct personalities. That doesn’t mean that I don’t still use a soft voice at times. Both of them still speak in more straightforward ways.  They are more inclined to go from 60-0 rather than gradually wind themselves down.

I do talk in a more soothing dreamy sort of way with my middle child. She is generally more easy going and speaks in a “cooing” sort of voice as she settles herself around bedtime. I match this and she seems to respond well.

If any of you are linguists or speech pathologists or any other specialty that would help to explain these communication phenomenons, I’d love to specifically hear from you. I am sure families everywhere communicate in unique ways with their kids, much like I do and also differently from how I do. I’d love to know more about how this happens from a scientific perspective. Parents and readers, what do you do when you communicate with each of your kids?

Communicate Uniquely With Your Kids

APA Reference
Krull, E. (2010). Communicate Uniquely With Your Kids. Psych Central. Retrieved on January 20, 2020, from https://blogs.psychcentral.com/family/2010/03/communicate-uniquely-with-your-kids/
Last updated: 17 Mar 2010
Statement of review: Psych Central does not review the content that appears in our blog network (blogs.psychcentral.com) prior to publication. All opinions expressed herein are exclusively those of the author alone, and do not reflect the views of the editorial staff or management of Psych Central. Published on PsychCentral.com. All rights reserved.