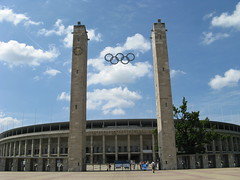 What a fascinating opportunity we have going on right now. The Olympics come just every few years, and they are in full force right now. Being the non-athletic musical person that I am, I’m in awe of the physiques and obvious skills these athletes have honed. The dedication and perseverance is worth recognizing.

In lieu of some fairly questionable role models in the world, I’d say the Olympians are a pretty decent lot to emulate. Granted, the Olympics has had its share of bad sports (Tonya Harding) and tragedy (Israeli athletes in 1972), but overall this is some of the best TV out there for families. What always astounds me about Olympic athletes is how their entire family adjusts to the lifestyle. Elite athletes don’t live like you and me.

They have hours of physical training, school, and usually massive amounts of travel and cost added to their lives. I wonder how families can even stay together and stay sane with all the intensity. Think about how off-balance this really is. Schedules, education, and jobs are all worked around the athlete’s needs. I would think it might be tough to be the sibling of an elite athlete. What happens when your senior prom night is on the same weekend as a big competition out of town for your sibling? As with most things, I would bet that some families take this in stride better than others. You really have to be on the ball as a parent to watch out for everyone’s needs in this situation.

But then when you see the families at the Olympics, the emotions are tough to hide. Parents leaping in the air, spouses with tears running down their cheeks, children waving to their Olympic parents, siblings cheering encouragement and beaming with pride.

Take a look at a few family snapshots I’ve seen from this Olympics:

So if your kid is excited to watch the Olympics, go for it. Watch it with them and make sure they hear the stories about how their families work together to make everything happen. Be sure they know how much character these athletes have to be able to do such great things. It’s not all about being strong and fast, it’s about intangible qualities that we all need like perseverance, patience, and endurance.

Go For The Gold, FMH readers!

APA Reference
Krull, E. (2010). Families Get Olympic Fever. Psych Central. Retrieved on June 2, 2020, from https://blogs.psychcentral.com/family/2010/02/families-get-olympic-fever/
Last updated: 17 Feb 2010
Statement of review: Psych Central does not review the content that appears in our blog network (blogs.psychcentral.com) prior to publication. All opinions expressed herein are exclusively those of the author alone, and do not reflect the views of the editorial staff or management of Psych Central. Published on PsychCentral.com. All rights reserved.

Coping with Divorce: In the Beginning