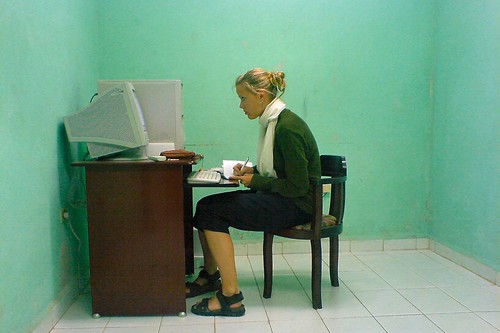 Many youth and young adults are immersed in virtual worlds and online games. They spend every possible moment using their skills and ingenuity to get to the next level of complex multiplayer games. Your attempts to get them to spend time offline are met with strong resistance and may be doomed.

Jane McGonigal, in her book Reality is Broken:  Why Games Make Us Better and How They Can Change the World points out that games offer a sense of being fully alive, focused and engaged in every moment. Games offer a sense of power, heroic purpose and community as well as the thrill of success and team victory. Games were designed to maximize interest and motivation with no personal attacks. Games are inspiring and create a sense of community. Games satisfy the hunger for more satisfying work and a sense of a more engaging life.

Reality can’t compete.  More than 3 billion ours are spent each week in gaming. More than 5 million gamers in the United States play an average of forty-five hours a week. The loss of involvement in and contribution to our society is significant.  In my experience, many of these individuals are emotionally sensitive young adults and youth.

McGonigal proposes that instead of taxing games or limiting their use or other such interventions that we work on making reality more like gaming. She defines a game as having four traits: a goal, rules, a feedback system, and voluntary participation. She points out that huge tasks have been accomplished by rallying online “players” to help, including Wikipedia, The Extraordinaries, and FreeRice.

McGonigal believes that gaming offers hope for those suffering with depression and anxiety as well as other issue. The challenge is to apply the components of games to real life. She believes that a good game is an unnecessary obstacle and that unnecessary obstacles increase self-motivation and provoke people to work at the edge of their abilities. So the first way to be more engaged and motivated is to tackle unnecessary obstacles. Get them out of your way. The second fix is to create extreme positive emotions through increased activity with an optimistic view of your ability. Do more satisfying work is the third fix. This means have clear, actionable goals. Fix four is to have better hope of success and five is to strengthen you social connections. Fix six is to  immerse yourself in epic scale. Games make you feel part of something bigger than yourself and more important routine daily tasks. Fix seven is to participate wholeheartedly and eight is to seek meaningful rewards for making a better effort. You get the idea. She wants to apply gaming principles to life, an innovative and creative solution to the many fears that get in the way for so many people.

Turns out the author has tested her ideas on herself. When she was bedridden and suicidal, she created a healing game called Superbetter
which she describes in a 2012 TED talk.  Superbetter is available for download and the goal is to help you increase your personal resilience.

McGonigal, J. Reality is Broken: Why Games Make Us Better and How They Can Change the World.  New York: Penguin Press, 2012.

APA Reference
Hall, K. (2018). Learning from Gamers: Making Reality More Rewarding. Psych Central. Retrieved on May 31, 2020, from https://blogs.psychcentral.com/emotionally-sensitive/2013/08/learning-from-gamers-making-reality-more-rewarding/
Last updated: 4 Feb 2018
Statement of review: Psych Central does not review the content that appears in our blog network (blogs.psychcentral.com) prior to publication. All opinions expressed herein are exclusively those of the author alone, and do not reflect the views of the editorial staff or management of Psych Central. Published on PsychCentral.com. All rights reserved.