Changing Habits: The Power of Believing 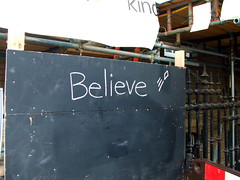 Habits are a big part of the way we live our lives and make decisions. More than forty percent of the actions people perform each day are habits rather than decisions. That’s almost half.

Good habits help you save your brain power. You don’t have to decide or think about brushing your teeth, you just do it. When people who have been depressed or living chaotically work on self-care and hygiene, they don’t have these good habits and must use a lot of energy to establish them. That’s difficult.

But what seems even more difficult is changing habits that are harmful to us or don’t serve us well. Sometimes habits aren’t helpful to us and we need to change them.

Habits apparently cannot be wiped out – they must be replaced. You can stop biting your nails, smoking, eating junk food, or yelling at people who challenge you. You can learn to put your clothes away and keep a clean home. You do it by substituting one behavior for another.

The reward is the feeling of calm you get from the combination of the distraction of the television and the comfort from the food. During a work day you may even imagine yourself being home on the couch watching your favorite show. You may consider what dip you want to buy to go with your chips. You may use these daydreams to help comfort yourself during the day.

But sometimes the way you comfort yourself is harmful. Too many chips or too much chocolate has negative effects, even though consuming them may be calming. Even watching too much television, especially when you have other tasks you need to complete, can be negative.

Changing Habits is Difficult But Possible

What you do depends on your goal. If you want to watch less television, then you might not sit on the living room couch when you arrive at home. You could sit in a comfortable chair in a room without a television. Or you may want to give yourself something different to do while sitting on the couch. If the primary reward of watching television is the distraction from your day, then finding a different way to distract yourself, like playing games with friends or family, would be likely to work.

One of the payoffs is that if you change one pattern, something called a keystone habit, then you are likely to make other shifts as well. People who change their diet often get take better care of themselves in other ways. They may stop smoking, exercise, dress more carefully, and become financially more responsible.

Making your bed every morning is correlated with a greater sense of well-being, stronger skills at sticking to a budget and better productivity.  Somehow initial shifts start chain reactions that help other good habits take hold. Keystone habits offer what is known as small wins. Having a small win leads to greater changes.

Even though the brain changes, developing new activities in the area of self-discipline, when you exchange a negative habit for a positive one, the areas associated with the old pattern are still active. When you are very stressed, you are likely to go back to your old habit, the one that has been ingrained for many years. But some people do not go back to their negative habits, even when under great stress.

What can make the difference? Duhigg says it’s about belief. When a person completely believes in their change, believes in the value of the new behavior, they won’t go back to the old pattern. One part of that belief is having a support group, people who help you keep the faith in the importance of making changes and doing what is best for you.

Making a small change successfully can give belief and hope in yourself. That hope and belief can energize you and show you that change is possible. So if you are struggling with depression or another overwhelming emotion, go for the small win. Use the principles of habit change. Take a small step, a small a change, and recognize the importance of that step  – then take another.

Duhigg, Charles.  The Power of Habit: Why We Do What We Do in Life and Business. New York: Random House, 2012.

Changing Habits: The Power of Believing

APA Reference
Hall, K. (2012). Changing Habits: The Power of Believing. Psych Central. Retrieved on July 14, 2020, from https://blogs.psychcentral.com/emotionally-sensitive/2012/04/changing-habits-the-power-of-believing/
Last updated: 1 Apr 2012
Statement of review: Psych Central does not review the content that appears in our blog network (blogs.psychcentral.com) prior to publication. All opinions expressed herein are exclusively those of the author alone, and do not reflect the views of the editorial staff or management of Psych Central. Published on PsychCentral.com. All rights reserved.