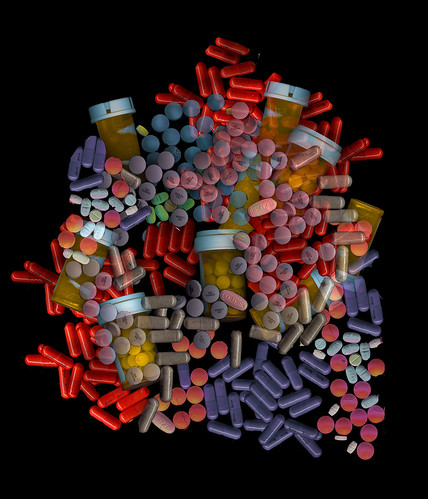 Several months ago I made the conscious decision to cut back on the narcotics I was taking to control my chronic pain.  For two and a half years I have been prescribed a variety of medications, including narcotic to control my pain.  I made this decision, on my own, for various reasons, most of them financial (being that I won’t be able to afford pain management and prescriptions following my divorce next month), but also because I realized that the medication was no longer very effective in treating my pain. When a pain management appointment a few months ago led to discussions about increased dosages and very strong medications, I realized that at age 34, I was heading down a slippery slope.  If my pain was not being controlled now, what would happen if my much degenerated spine were to need another surgery requiring pain medication in later years?  The answer: I would be out of options.

I began taking these opiates two and a half years ago following an emergency herniated disc repair, followed shortly by a three-level lumbar spinal fusion.  A year and a half after that I had a car accident that damaged my upper back and neck, followed by another car accident that damaged my mid-back and temporarily dislocated a rib.  I have spent the past 20 months doing intensive physical therapy.  I have done my part.  I lost almost 50% of my body weight and increased my strength considerably.  Physically I am in great shape and yet still struggle with chronic pain.

When I began to cut back I started very slowly.  I began by decreasing one pill a week for several weeks, then cutting back on shorter acting ones, etc.  But the side effects have been difficult to deal with because narcotics are something your body is DEPENDENT on.  I never abused my medication and took them as prescribed.  That being said, my system still became dependent on them and in decreasing the doses, it has thrown my body into a tailspin and cutting back on these medications has proven to be a very difficult undertaking.  It is a SLOW process.  I am doing this with the help of my doctors, but no amount of research could have prepared me for what I am experiencing.  I want to share my experience with you for those of you who are considering this because, although I do not regret my decision, I think it is important to be prepared for the side effects.

I do not discourage cutting back or stopping opiates by any means (it is a completely personal choice that should be made by you and your doctor only), I just think everyone should know the unadulterated facts. Here are a few withdrawal symptoms I thought were important to share:

I am still in the process of cutting back and will likely be doing this for a year.  I may never be free of my “as needed” medications due to flare-ups, however my goal is to take them as little as possible so that they may be more effective.  I am happy to say that since decreasing them (at this point by almost 1/5 or more) when I am really in pain, the medication is actually effective in treating the severe pain.

If anyone is considering this, I would advise talking to your physician and all doctors involved in your treatment.  They can help in supportive treatment, reducing your dosages and trying to keep you as comfortable as possible while monitoring possible complications.  There are several times  I suggested a doctor can prescribe medications to help with withdrawal symptoms, and these are all medical and personal choices, but a word to the wise, you don’t want to come off a few medications only to take five more to combat those that you are removing from your daily regimen.  The most important thing to remember is that this is uncomfortable, it does suck, but it will pass.

If you have ever done this, are doing it or have done it, my heart goes out to you and I congratulate you!  If not, I do not condemn the use of opiates or narcotics.  I believe that they are effective medications for pain management and that this is a purely personal preference!  Best of luck!

Photo courtesy of psyberartist via Compfight

APA Reference
Rydzy MSW, T. (2013). Opiate Withdrawal (Outpatient): Slow and Steady Wins the Race. Psych Central. Retrieved on June 2, 2020, from https://blogs.psychcentral.com/chronic-pain/2013/12/opiate-withdrawal-outpatient-slow-and-steady-wins-the-race/
Last updated: 29 Dec 2013
Statement of review: Psych Central does not review the content that appears in our blog network (blogs.psychcentral.com) prior to publication. All opinions expressed herein are exclusively those of the author alone, and do not reflect the views of the editorial staff or management of Psych Central. Published on PsychCentral.com. All rights reserved.