Poor Treatment in an Emergency Due to Mental Health Bias 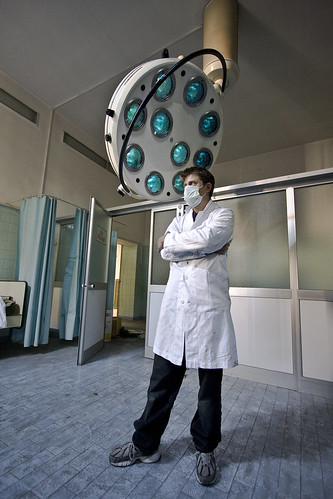 It happened again- poor treatment in the emergency room.  But, this time I am doing something about it because I am fed up with being treated like a drug addict, or a “crazy person” just because of the medications I HAVE TO take in order to move, or the incorrect diagnosis codes that are in my chart.  I did not CHOOSE to live this way and I do not deserve to be treated poorly because of it.

Last week a new tooth was hurting (since one root canal and multiple cavities was not enough) and I found out I needed yet another root canal.  The dentist gave me a 7-day course of amoxicillin.  I haven’t taken amoxicillin since I was a child, so I figured it was fine.  I was wrong. The day I started taking the medicine I was wheezing.  I assumed I was catching bronchitis, as I am prone to it this time of year.  The next day, however, the wheezing was worse and when I called my doctor, she told me to look in my throat and, lo and behold, I had hives in my throat.  She told me to go to the emergency room.  Knowing what I would face there, I actually asked her if I could just take more Benadryl and “wait it out.”  She said it could progressive rapidly (which it did), so I went to the ER.  However, so terrified I am of the treatment I will receive at the hospital anymore that I was willing to risk my throat closing, rather than going to the ER.

Everything is electronic, which means the minute I get into that room that doctor already knows my medical history (or the completely incorrect diagnosis codes they have in my chart from previous visits), my medications, my previous visits, etc.  I have been to the ER three times in 6 months and three times I have been treated poorly.  This time, in between coughing and breathing hard, the doctor asked me for my medication and medical history.  He them “examined” me and I used this term loosely because although I said I had hives in my throat he never even looked in my mouth.  What he did do, however, is say, “Do you have a history of anxiety because it seems like you are having an anxiety attack.”

I almost lost it.  I have had panic attacks and yes, the feeling of your throat closing can incite panic in even the calmest of people so I was a little anxious, but I was legitimately in the ER for an allergic reaction, which he would have seen if he had looked in my mouth.  I told him I know what a panic attack is and I was perfectly calm before I got here, that I was not having a panic attack, that my throat hurts and I cannot swallow and that all of this started when I began to take amoxicillin. The only thing he condescendingly told me was, “well, the Benadryl must have done its job because you are not wheezing anymore, but we will treat you for an allergic reaction anyway.  Don’t worry, you are circulating air just fine and you’re tongue is not really swollen or anything.”

He then pumped me full of steroid, epinephrine, Benadryl and Pepcid and ran a bag of fluids.  If the doctor believed I was having a panic attack, why didn’t he pump me full of IV valium?  That’s the treatment for a panic attack, not epinephrine, which would increase anxiety.  I was just another “hysterical” patient with a mental health history that came into the ER, probably having silly boy troubles and wanting a “fix” on my pain drugs in his eyes.  And he made sure to treat me exactly like that.

It is exhausting to be treated poorly by the very people who are supposed to help you.  Doctors cannot get away with that.  It is for that reason that, pumped full of steroids and pissed off, I called a patient advocate and reported the incident, wishing I had done so in May when the last doctor also treated me poorly.  I reported this incident and told them that it was a pattern that seemed to be developing.  The advocate pushed for a formal complaint and I agreed.

I have had several readers tell me of similar experiences and I am going to tell you the same thing- doctors CANNOT treat patients poorly because they are on pain medication that they need or because they suffer from depression or anxiety.  If you are treated with anything less than 100% of the respect and the care you deserve, you need to report these doctors to the hospital’s patient advocates so they can be counseled.  Perhaps they don’t know they are doing it.  Perhaps they are doing it on purpose.  I don’t know anymore, but I know I won’t stand for it, and neither should you.

Poor Treatment in an Emergency Due to Mental Health Bias

APA Reference
Rydzy MSW, T. (2013). Poor Treatment in an Emergency Due to Mental Health Bias. Psych Central. Retrieved on February 26, 2020, from https://blogs.psychcentral.com/chronic-pain/2013/10/poor-treatment-in-an-emergency-due-to-mental-health-bias/
Last updated: 15 Oct 2013
Statement of review: Psych Central does not review the content that appears in our blog network (blogs.psychcentral.com) prior to publication. All opinions expressed herein are exclusively those of the author alone, and do not reflect the views of the editorial staff or management of Psych Central. Published on PsychCentral.com. All rights reserved.

3 Magic Words to Cultivate Your Connection with Anyone (Including Yourself)