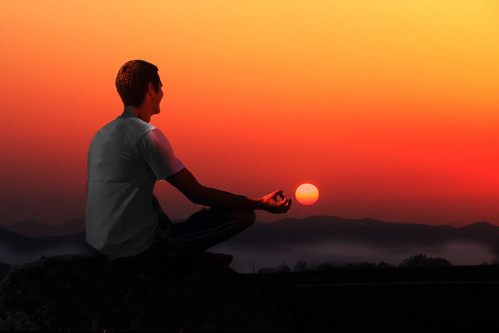 These days, many people are turning to natural health aids to help compliment the use of medication and therapies.

When someone is being treated for bipolar disorder, their psychiatrists often recommend a strict diet and regular exercise to help combat the depression, anxiety, and mood swings that come with the illness.

The use of meditation is another way that many people deal with the troubling symptoms of depression and mania.

Meditation has been used for thousands of years to renew the spirit and calm the mind.

Why We Use Meditation

Troubling thoughts are common for people with bipolar disorder.

In addition, in our society, it is difficult for anyone to simply “be” rather than “do”. We are so caught up in the fast pace of our daily lives that we don’t take time to truly live quietly and peacefully in the present moment.

More and more studies show that this will have a negative impact on our mental health.

When one regularly practices meditation, especially during and right after the practice, a feeling of well-being may be observed.

Studies have shown that meditation can help lower blood pressure and reduce pain.

Meditation has also been shown to help people with social phobia.

Researchers don’t yet fully understand how meditation affects the brain.

Some research points to increased brain levels of GABA, a biochemical associated with relaxation and reduced anxiety.

Some clinicians think that meditation boosts levels of nitric oxide, which is known to relax blood vessels.

The most impressive findings have come from the Laboratory of Affective Neuroscience at the University of Wisconsin, where psychologists have found that meditation can change the wiring of the brain.

Through the practice of mindfulness meditation, brain scans in patients showed an increase in activation in areas in the left side of the brain associated with decreased anxiety and positive emotional states.

There is little research that has been done on meditation and bipolar disorder specifically, but because it helps anxiety and depression, it is proposed that it can help those with this mental illness.

There are many ways that meditation is said to help people with mental illness, including:

Are There Risks to Meditation?

I have been meditating on and off for many years.

During this time,  meditation has helped me and given me a sense of peace; it has never hurt me.

The worse thing I’ve done is stopped meditating for a while.

However, it is the opinion of some that meditation can be risky for those who have mental illness.

I have no data on this, but as a response to one woman’s concern, meditation and spirituality expert Deepak Chopra advised people with bipolar disorder to start meditating five minutes a day, twice a day, for a month.

If things are going well after a month, you may increase to 10 minutes a day, twice a day.

Slowly increase until you reach 20 minutes a day, twice a day.

Monitor how you feel for any signs of instability.

Of course, I always recommend to talk to a doctor or other expert to see if meditation is right for you.

Have you ever tried meditation? Are you for it, or against it? Do you think it could harm people with bipolar disorder? Has it helped you?

APA Reference
Dawkins, K. (2019). Bipolar Disorder and Meditation. Psych Central. Retrieved on August 15, 2020, from https://blogs.psychcentral.com/bipolar-life/2013/07/bipolar-and-meditation/
Last updated: 20 Mar 2019
Statement of review: Psych Central does not review the content that appears in our blog network (blogs.psychcentral.com) prior to publication. All opinions expressed herein are exclusively those of the author alone, and do not reflect the views of the editorial staff or management of Psych Central. Published on PsychCentral.com. All rights reserved.