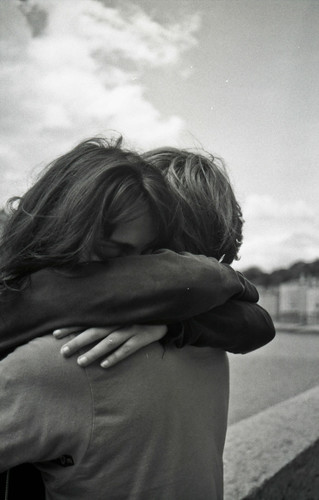 When I was in elementary school, my grandparents babysat me while my mom was at work.

My grandparents lived in a busy neighborhood with lots of children.

There were kids my age next door on both sides, and we would all gather to play in the afternoons or on weekends.

One Saturday, we were playing hide and seek throughout the neighborhood and some of the girls were suggesting that I be “it”—the one to find the others.

I didn’t like being put on the spot, and I took it personal that I was being singled out. I told them I was quitting, and ran home.

This is a silly example, but it shows how early I had trouble with my peers.

From a young age I always assumed that I was being attacked and made fun of, and maybe some of that was true.

I never had a hard time making friends, but my moods always made it hard to deal with them long term.

In middle school, I would get irritable if I spent too much time with my friends.

A good day would turn into me kicking my friend out of my house when they didn’t behave like I expected.

My parents noticed my behavior and would scold me about it.

“You’ve got to be nicer. And more patient.”

I don’t know why I’ve had trouble with my peers since childhood. It’s not to say that I haven’t had best friends, boyfriends, or acquaintances—I’ve been successful, but I recognize I’ve messed up a lot.

I can make the friends, but can I make them stay?

Do I want them to stay?

It’s no secret that many individuals with bipolar disorder have a hard time maintaining friendships.

As I said, I don’t think those with bipolar have a hard time making them.

People with bipolar can easily appear alluring, fun, and the kind of friend someone wants to have.

The hard part is maintaining that persona.

There are loads of blogs and forum topics online about friendships and bipolar disorder.

The blog Bipolar Manifesto says, “the swings we experience are not only destructive to ourselves but to those we are closest to”. Preserving relationships depends on hard work, and it appears that the weaker relationships are often dissolved due to absence, irritability, and other symptoms.

When I was in high school, my relationships began to suffer incredibly. My middle school best friend and I quickly drifted apart after freshman year.

During high school, symptoms of my bipolar became very apparent, and it was quite easy for me to drop this friend in favor of wild nights with boys.

I think she thinks I betrayed her, and looking back, maybe I did.

But I didn’t realize it. And I felt that I couldn’t control my ways sometimes.

That is part of the problem.

I was able to keep some friendships going throughout that time, and the relationships that survived were mostly with male friends who didn’t require that much attention.

I continued to hang out with mostly guys throughout college, as my impression of female friends was tainted.

We all lose sometimes, unfortunately.

My current friendship state is peculiar. I’m married, and my husband is my greatest friend. We’ve been friends for close to 10 years, and I’m lucky that I get to spend all my time with someone that is so much like me.

I am also very close with my little sister, but I am still struggling with real life friendships.

I have just joined a professional organization, so that might help. What I have to keep in mind, though, is that relationships take nurturing.

I have to pull myself out of my moods sometimes and spend time with people in order to keep relationships maintained.

They don’t do so themselves.

Like many with bipolar disorder, it is easier to keep friends online.

I think this helps us get support without having to deal with the pain and rejection of friends in real life.

My therapist says I need physical friendships, but after a lifetime of issues, sometimes that seems daunting.

How do you do in maintaining friendships? Are you like many with bipolar disorder, having trouble with personal relationships? What are your tips for others on how to maintain friendships?

APA Reference
Dawkins, K. (2013). Bipolar and Keeping Friends. Psych Central. Retrieved on April 6, 2020, from https://blogs.psychcentral.com/bipolar-life/2013/04/bipolar-and-keeping-friends/
Last updated: 13 Apr 2013
Statement of review: Psych Central does not review the content that appears in our blog network (blogs.psychcentral.com) prior to publication. All opinions expressed herein are exclusively those of the author alone, and do not reflect the views of the editorial staff or management of Psych Central. Published on PsychCentral.com. All rights reserved.