Learning to Be Bipolar vs Waiting to Crash

Imagine you’ve never seen a car before and the first one you see was involved in a fatal accident. You express how tragic that is and that you would really love to be able to help keep that from happening to others. They show you videos of all kinds of car crashes and tell you how many millions of lives are devastated by them. 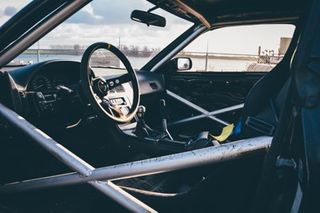 Since you don’t understand the utility of having cars, you may suggest doing away with cars altogether. Or perhaps creating a 20 mph speed limit on all roads. Neither of these solutions would work, of course, because you wouldn’t get any compliance from those who have cars.

It would be far more productive to study all of the costs and benefits of having cars and use that study to determine the best desired outcomes. In this case, the premise would change from “cars are inherently bad” to recognizing that cars have value but are also dangerous. The focus of all efforts would be to maximize the usage of cars while minimizing the accident rate.

Starting from such a premise would lead you to suggest that better education and training would make better drivers. In looking for people to perform that education you would be looking for the those who drove the best and not those who crash every time they take the car out.

Those of us who are performance driving enthusiasts are looking to learn from the top race drivers for the ultimate education. Nobody would give a platform to those who have not developed winning skills, nor would we ever take lessons from anyone who crashes every time he/she gets behind the wheel. Their premise that we cannot drive at high speeds would keep them from ever winning.

But that is exactly the premise of those who control the conversation about bipolar and you can see it even in what they call it. Always appending disorder to the word bipolar is akin to always appending accident to the end of automobile. In other words, saying “bipolar disorder” is the same as saying “car accident” every time you mention a car.

The dominant premise in bipolar circles is to only see bipolar as disordered and advocate attempting to slow it down or stop it as the only solution. We even elevate those who continue to be accident prone to the status of experts.

And what is the result of following that premise? According to the National Institute of Mental Health in their landmark STEP-BD study: “According to the researchers, these results indicate that in spite of modern, evidence-based treatment, bipolar disorder remains a highly recurrent, predominantly depressive illness.” This is like telling car drivers they will still crash every time they go faster than 20, but at least with seat belts and air bags they might not die.

But what if their premise is wrong? What if we CAN learn to function while manic or depressed? If the search for solutions were based on that premise we would create completely different tools and outcomes.

And this is not just a hypothetical exercise. Over ten years ago I accepted the premise that we could learn to function over a broader range of states and varied intensities. After several iterations I now have a system that has helped myself and many others to do it. The education program consistently produces outcomes that support that premise; the proof is in the lives of hundreds of people living with Bipolar IN Order instead of falling into disorder every time they cycle into mania or depression.

The understanding of IN Order concepts allows us to live fulfilling lives in solid relationships with our families or coworkers. Those around us are no longer negatively affected by our states and no longer live in fear of another episode. We no longer act badly when manic and can function normally no matter how deeply we are depressed. While we may not like depression, we see tremendous insight in the experience and use that insight in positive ways.

The list of positive outcomes goes on and on, but the point is we have learned to function while manic or depressed and even see advantages in being in the states. This is completely different compared to those who only survive episodes of intense mania or depression and can only function at their highest level when in partial or full remission.

Here are a couple of quotes from some of those who have come to support my premise of Bipolar IN Order.

“Too often, in having to accept their condition, people end up feeling pathologized-reduced from a full person to a label. But Tom looks beyond the diagnosis to help people embrace-and accept-the best parts of who they are, instead of reflexively dismissing their feelings and experiences as a simple manifestation of illness.”

“Bipolar In Order provides the essential message that symptom reduction or elimination is far from the main goal of adaptation and intervention. Sure to challenge traditional thinking, this important work is integrative and wise.”

Learning to Be Bipolar vs Waiting to Crash
Tweet 0

APA Reference
Wootton, T. (2016). Learning to Be Bipolar vs Waiting to Crash. Psych Central. Retrieved on October 1, 2020, from https://blogs.psychcentral.com/bipolar-advantage/2016/04/learning-to-be-bipolar-vs-waiting-to-crash/
Last updated: 7 Apr 2016
Statement of review: Psych Central does not review the content that appears in our blog network (blogs.psychcentral.com) prior to publication. All opinions expressed herein are exclusively those of the author alone, and do not reflect the views of the editorial staff or management of Psych Central. Published on PsychCentral.com. All rights reserved.