Bipolar IN Order has been an incredibly interesting journey. With each new year come new insights that build upon breakthroughs from previous years. Although it feels like each breakthrough is the furthest that we could possibly go, the next year always proves that there is more to learn about depression and mania. And this year is no exception to the rule. 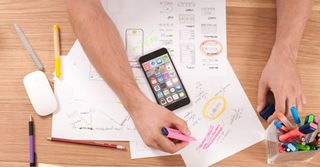 My breakthrough this year is that even in my deepest depression I can be just as productive as in any other state.

One of the aspects of the Bipolar IN Order program is that we can find value in every moment of our lives. While that value is relatively easy to see when we are at states that are inside of our comfort zone, it is often very difficult to see any value in the more intense states. This is especially true when the intensity of the states are way outside of what is comfortable for us. But as we expand our comfort zone and learn to function in the more intense states, we learn to find value even in such intense states.

Many students of the Bipolar IN Order online education program have expanded their comfort zone range to the point where, no matter what state they find themselves in, they are confident in their ability to function while the state is happening. I have long argued that we need to contrast the difference between the value of the insight found in depression and the things we can accomplish in hypomania.

While low levels of mania do enable us to get more things done, the advantages in depression include that we gain tremendous insight from it even when we are not very productive at getting things done. Most people who learn to see the insights in depression can understand the contrast and value the insights over getting the dishes done, for example. It is, of course, a far more complex equation but I hope you see the point from this simplistic example.

This new discovery turns that argument on its head.

I recently learned through direct experience that I can be just as productive in terms of getting things done during my depression as in any other state. That means the benefits of getting things done in a hypomanic state are just as available to me during depression. And just to be clear, this includes incredibly deep depressions that at one point in my life had me attempting suicide during a similar depressive state.

In some ways, I might even say that I’m more productive during this deep depression than even the best times of hypomania. I am much more focused, I get projects completed instead of starting a bunch of new projects but not completing any of them, and my creative efforts are far more clear. I have many projects going on and I am able to focus on each one in turn to complete it before getting to the next. The important thing is that they are getting completed and I have accomplished more finished projects during this deep depression than at any other time.

Some might argue that I am not depressed because I am productive. They believe that the very definition of depression precludes any ability to function at all. While a full answer to that allegation would take us off topic from this particular article, in brief it is because I have learned to separate what it feels like to be depressed from how I respond to it. Separating our feelings from our reactions to them is a central concept of the Bipolar IN Order online educational program. I have all of the physical, mental, emotional, spiritual, social, and career/financial feelings associated with an incredibly deep depression and that alone would warrant a diagnosis by anyone who examines my list of symptoms.

After giving a keynote speech about functioning during depression, I was told that I was not depressed by Aaron Beck, the person behind the Beck Depression Inventory. When I shared with him my list of “symptoms’ he agreed that I was depressed after all. Comically, he told me it was not possible to function during depression because he had never seen it before. His refusal to accept that someone else produced results that he could not is indicative of how strong the confusion is in those stuck in the ‘disorder equals impossible’ paradigm that has influenced the entire field.

For the most part, the depression and bipolar disorder communities are unaware that we can be IN Order instead of being in Dis-Order, which is why I invented the terms Bipolar IN Order and Depression IN Order to illustrate the difference. Since I have helped so many others achieve functionality during depression, it is past time for everyone to accept the distinction between disordered and in-ordered reactions to states.

The implications of this discovery are phenomenal, yet they somewhat complicate my understanding of mania and depression. If I am to reconcile my belief that all states are of equal value I will need to find as much insight hidden in mania as I find in depression. I believe it is there, so I look forward to another interesting journey of discovery. I will be sharing my next breakthrough when it comes and accept that it may not be what I set out to find.

APA Reference
Wootton, T. (2016). High Functioning Depression, a New Breakthrough. Psych Central. Retrieved on September 24, 2020, from https://blogs.psychcentral.com/bipolar-advantage/2016/02/high-functioning-depression-a-new-breakthrough/
Last updated: 29 Feb 2016
Statement of review: Psych Central does not review the content that appears in our blog network (blogs.psychcentral.com) prior to publication. All opinions expressed herein are exclusively those of the author alone, and do not reflect the views of the editorial staff or management of Psych Central. Published on PsychCentral.com. All rights reserved.