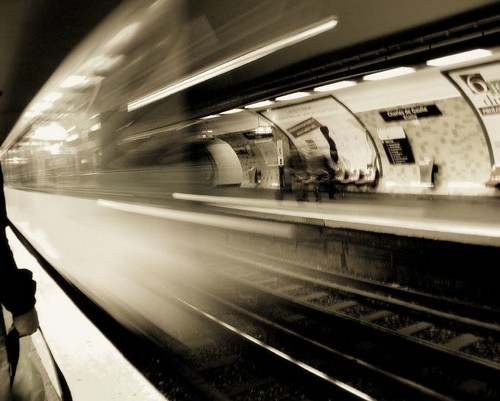 This is totally anecdotal, but most people I know report having done things in fight-or-flight situations that they never would have done otherwise. In fact, last fall someone tried to snatch my phone out of my hand while I was on DC metro’s green line. I reflexively held onto it as she pivoted and ran off, tugging on the phone but losing her hold. In an unlikely show of bravado I stood up, gave brief chase and yelled something unladylike behind her as a large group of her fellow high school students streamed onto the train.

We’ve all done instinctual things that make no sense. Now that I am not activated, I am fully aware that chasing this person was foolish because

1) like most unarmed lay people, I was taught to comply when targeted for theft
2) I didn’t exactly have a plan if I caught her
3) I still had my phone

This isn’t something I would have done consciously, but that’s the thing: I wasn’t functioning consciously, I was functioning instinctually. When our fight/flight/freeze response is activated, part of the process involves the subduing of our higher cognitive processes.  This is helpful from a survival standpoint, since debating the merits of different responses takes a lot longer than simply going into action.  The downside is a lot of “victim” behavior doesn’t make a lot of sense, especially when it comes to the little understood “freeze” response.  Rebecca Ruiz, in an article from Slate has a rather elegant outline of why this happens:

“The brain’s prefrontal cortex—which is key to decision-making and memory—often becomes temporarily impaired. The amygdala, known to encode emotional experiences, begins to dominate, triggering the release of stress hormones and helping to record particular fragments of sensory information. Victims can also experience tonic immobility—a sensation of being frozen in place—or a dissociative state. These types of withdrawal result from extreme fear yet often make it appear as if the victim did not resist the assault.”

A lot of my work with survivors of sexual violence involves working through shame and guilt around their responses to the assault: children who were compliant, men who tried to act like nothing had happened, women who froze. These responses make perfect sense from a survival standpoint, though.

So next time you encounter something gets your adrenaline rushing and you do something that is out of character, give yourself a break.

APA Reference
Staggs, S. (2014). The Irrational Fight-Flight-Freeze Response. Psych Central. Retrieved on February 27, 2020, from https://blogs.psychcentral.com/after-trauma/2014/02/the-irrational-fight-flight-freeze-response/
Last updated: 20 Feb 2014
Statement of review: Psych Central does not review the content that appears in our blog network (blogs.psychcentral.com) prior to publication. All opinions expressed herein are exclusively those of the author alone, and do not reflect the views of the editorial staff or management of Psych Central. Published on PsychCentral.com. All rights reserved.